Barney Clark’s heart was made of plastic — and instead of beating, it whooshed.

The 61-year-old retired dentist was in an advanced stage of cardiomyopathy, a progressive weakening of the heart muscle, when he became the first recipient of a permanent artificial heart on this day, Dec. 2, in 1982.

Heart transplants were already being done to prolong lives, but in a limited, last-resort way. Surgeons accomplished the first human-to-human transplant in South Africa in 1967, when a man with severe heart damage received the heart of a 25-year-old woman who had died in a car crash. He survived 18 days. In 1977, after new immunosuppressant drugs dramatically increased the odds of survival, the first recipient of a heart transplant at Columbia University’s Medical Center — one of only three institutions in the country performing the surgery at the time — survived 14 months.

But Clark was 11 years too old to be a candidate for a heart transplant, according to the criteria U.S. surgeons had by then agreed on. His only shot at survival was Dr. Robert Jarvik’s pneumatically-powered heart. The Jarvik 7, as it was called, comprised two plastic pumps powered by compressed air, which required the patient to be hooked up at all times to a rolling console the size and weight of a refrigerator. The artificial heart could pump blood through the body at 40 to 120 pulses per minute, but it replaced the telltale heartbeat with a soft clicking sound followed by a whoosh.

Clark knew what he was in for: before agreeing to the operation, he first toured a facility where Jarvik’s hearts were keeping several sheep and calves alive, including a calf named Tennyson who set the survival record of 268 days, according to TIME.

He met the requirements for the surgery by having a fatal heart condition, with no other treatment alternatives, as well as a strong will to live. By the time of the surgery, he was nearly dead already: his heart was pumping a liter of blood per minute, or a fifth the normal rate.

The surgery was considered a success, since Clark went on to live another 112 days. A surgeon told TIME that his color had changed, from blue to pink, after more oxygen infused his blood. There were hitches, however. A week after the surgery, he suffered a series of seizures his doctors blamed on an imbalance of fluids and salts. Following the seizures, he was often disoriented, and sometimes believed he was still a dentist in Seattle.

He never left the hospital after his transplant, and ultimately died of “circulatory collapse and secondary multi-organ system failure” triggered by an infection that was likely the result of a blood transfusion, according to his obituary in the New York Times.

Later recipients fared somewhat better with the Jarvik 7. William Schroeder lived a record 620 days with one, although his quality of life was poor after he suffered serious strokes within the first three weeks. Another recipient, Leif Stenberg, made remarkable progress with his new heart, and lived 229 days before suffering a fatal stroke.

Stenberg’s renewed vigor was a triumph fraught with unexpected philosophical considerations. Long suspected of being a powerful Swedish crime boss, he was never convicted of any crime, partly because his health problems delayed a trial on charges of tax evasion. But the transplant led to a new delay, since Swedish law defined death as the moment when one’s heart stopped beating. Stenberg’s attorneys, therefore, argued that he should not have to stand trial, since he was already dead.

Read the full report on Barney Clark’s operation from 1982, here in the TIME Vault: Living on Borrowed Time 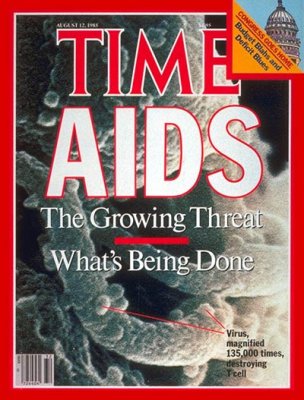 World AIDS Day: The History of a Virus in 7 Stories
Next Up: Editor's Pick