Rand Paul: The Politicians Are To Blame in Ferguson

We are witnessing a tragedy in Ferguson. This city in Missouri has become a focal point for so much. The President and the late Michael Brown’s family have called for peace. I join their calls for peaceful protest, but also reiterate their call to action — “channel your frustration in ways that will make a positive change.”

In the search for culpability for the tragedy in Ferguson, I mostly blame politicians. Michael Brown’s death and the suffocation of Eric Garner in New York for selling untaxed cigarettes indicate something is wrong with criminal justice in America. The War on Drugs has created a culture of violence and put police in a nearly impossible situation.

In Ferguson, the precipitating crime was not drugs, but theft. But the War on Drugs has created a tension in some communities that too often results in tragedy. One need only witness the baby in Georgia, who had a concussive grenade explode in her face during a late-night, no-knock drug raid (in which no drugs were found) to understand the feelings of many minorities — the feeling that they are being unfairly targeted.

Three out of four people in jail for drugs are people of color. In the African American community, folks rightly ask why are our sons disproportionately incarcerated, killed, and maimed?

African Americans perceive as true that their kids are more likely to be killed. ProPublica examined 33 years of FBI data on police shootings, accounted for the racial make-up of the country, and determined that: “Young black males in recent years were at a far greater risk of being shot dead by police than their white counterparts – 21 times greater.”

Can some of the disparity be blamed on a higher rate of crime in the black community? Yes, but there is a gnawing feeling that simply being black in a high-crime area increases your risk for a deadly altercation with police.

Does bad behavior account for some of the interactions with law enforcement? Yes, but surely there must be ways that we can work to prevent the violence from escalating.

On the other side of the coin, defenders of the War on Drugs say, look at Mexico if you want to see drug violence unchecked by police power.

Isn’t there another alternative where we utilize police power to counter violence, but for the most part leave non-violent citizens alone?

As I’ve visited our nation’s urban centers and predominantly white, impoverished rural areas, I sense an undercurrent of unease. It’s not just lack of justice, but also a cycle of poverty, to crime, and back to poverty again. There is a sense of helplessness. To be sure, we all hold a certain degree of responsibility for our lives and it’s a mistake to simply blame others for our problems.

Reforming criminal justice to make it racially blind is imperative, but that won’t lift up these young men from poverty. In fact, I don’t believe any law will. For too long, we’ve attached some mythic notion to government solutions and yet, 40 years after we began the War on Poverty, poverty still abounds.

When you look at statistics for the white community alone, you see that we’ve become two separate worlds in which the successful are educated and wait to have children until they are married, and those in poverty are primarily those without higher education and with children outside of marriage.

This message is not a racial one. The link between poverty, lack of education, and children outside of marriage is staggering and cuts across all racial groups. Statistics uniformly show that waiting to have children in marriage and obtaining an education are an invaluable part of escaping poverty.

I have no intention to scold, but escaping the poverty and crime trap will require more than just criminal justice reform. Escaping the poverty trap will require all of us to relearn that not only are we our brother’s keeper, we are our own keeper. While a hand-up can be part of the plan, if the plan doesn’t include the self-discovery of education, work, and the self-esteem that comes with work, the cycle of poverty will continue.

I will continue the fight to reform our nation’s criminal justice system, but in the meantime, the call should go out for a charismatic leader, not a politician, to preach a gospel of hope and prosperity. I have said often America is in need of a revival. Part of that is spiritual. Part of that is in civics, in our leaders, in our institutions. We must look at policies, ideas, and attitudes that have failed us and we must demand better.

Real solutions will include a revival of spirit, purpose, and action. I, for one, pledge to be part of those solutions.

Read next: Ferguson Is the Wrong Tragedy to Wake America Up 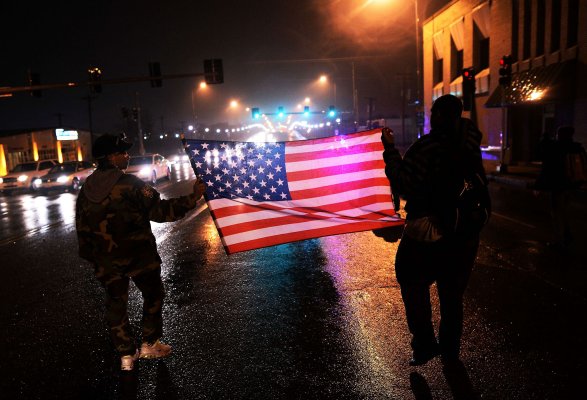 Ferguson Is the Wrong Tragedy to Wake America Up
Next Up: Editor's Pick