Here's the Scientific Way to Make a Perfect Pumpkin Pie

The kind of fat that goes into a pie dough can totally change the chemistry of the crust—and for a supremely flaky crust, you can’t beat lard, as former White House pastry chef Bill Yosses explains in the above selection from the 2014 World Science Festival event “Biophysics? More like Pie-o-Physics!” (Yosses is something of an authority on deliciousness; earlier this year, President Obama joked that his pies were so good he must be lacing them with crack cocaine.)

But traditional Thanksgiving fare presents additional “pie-o-physics” conundrums. Pumpkin pie filling is closer on the pastry evolutionary tree to flan or custard. Baking one requires some special considerations, according to Yosses.

In pumpkin pie, “the eggs coagulate to form a silken smooth network,” Yosses told us. “The egg proteins shrink as they cook, and you need to stop the process at the right time.” The time to remove a pumpkin pie, he says, is when it is “set,” but the center should still jiggle when shaken in the oven. “This is sensitive because too little cooking and the pie will be liquid.”

To avoid overcooking his pumpkin pies, one trick Yosses likes to employ is to lower the bottom of pie dish into cold water for about 30 seconds right after taking it out of the oven (take care not to splash water or burn yourself). This will stop the protein threads from continuing to cook.

“I like a filling made with acorn squash and some sugar pumpkin, and I love trying all kinds of vegetable and ginger variations—but then it is not really a pumpkin pie,” Yosses says. He prebakes the crust for his pumpkin pie before filling. If you do the same, but don’t want an extra-crispy edge on the crust that forms during the second round in the oven, he recommends covering the edge with aluminum foil before baking.

If any foodies reading this feel guilty about going with canned pumpkin instead of the fresh stuff, take comfort in the fact that Yosses himself often reaches for a can of Libby’s pumpkin pie mix. As he says: “Why reinvent the wheel?” 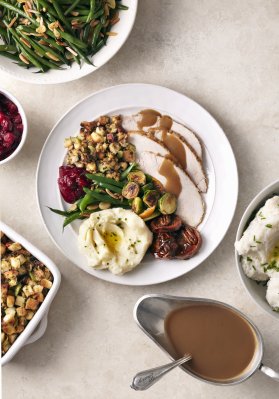 11 Ways to Stay Slim Through the Holiday Season
Next Up: Editor's Pick