4 Theories for Why the Ferguson Announcement Was Delayed

A grand jury had decided by early Monday afternoon not to indict a white police officer in the August shooting death of an unarmed black teen that sparked weeks of violent protests in Ferugson, Mo. But hours passed before a St. Louis County prosecutor announced the decision not to indict Darren Wilson. By the time Robert McCulloch delivered the news after 8 p.m. local time, tension had built for eight hours and the city was once again gripped by violent clashes.

Even before then, observers were asking skeptically why there had been such a long delay between the decision and the announcement, with critics blaming it for fueling the fire.

And when questions about the timing of the announcement reached Missouri Gov. Jay Nixon, his response was terse: Ask McCulloch.

In the absence of any elaboration from public officials, critics lashed out at McCullough and speculation abounded to explain the delay. Here are some of the theories, none of them confirmed or substantiated in any way.

To thin out the crowds

Falling temperatures may have winnowed down the crowds gathered in Ferguson to a committed few, though Vox reports that pundits warned such a tactic had the potential to make the situation only more combustible. The decision had “deliberately almost left themselves with the people most committed to despair,” said MSNBC’s Joy Reid.

One theory is that McCulloch, who issued a long critique of the news media before making the announcement, just wanted his 15 minutes of fame on primetime TV.

To beef up patrols

Nixon had previously said police would have 48 hours advanced notice before the decision was revealed to the public. That window of opportunity was shaved down to less than a day, raising questions about police preparedness, and more time might have been needed to get ready for the unrest that followed.

Among the harshest critic was CNN’s Jeffrey Toobin, who penned an op-ed calling the delay “devastating”

“Here’s the thing about that time of night: it’s dark,” Toobin wrote. “The ultimate verdict on the grand jury’s decision is up to history at this point. But the verdict on McCulloch opting to announce the decision at night is clear—and devastating.”

Correction: The original version of this story misstated the name of MSNBC host Joy Reid. 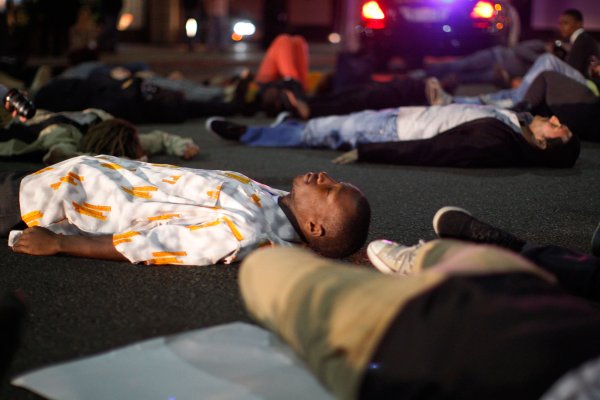 See the Nation React to the Ferguson Decision
Next Up: Editor's Pick