At many times in Europe’s turbulent history religious leaders have turned a blind eye to violence and discrimination. At other times faith itself has set the battleground. This awareness heightened both the strangeness and the poignancy of the Nov. 25 speech by Pope Francis to members of the European Parliament in Strasbourg.

The Pontiff wasn’t the most obvious person to deliver hard truths to elected politicians about the rising threats to the democracies they serve, or, as head of the Catholic Church, to convey a blast against global corporations that undermine the democratic process by co-opting institutions, as he resonantly expressed it, to “the service of unseen empires.” Yet standing at the lectern at the center of the plenary chamber, peering through wire-rimmed reading glasses at his script, he did these things and more. The leader of a religion that has created its share of fractures made an eloquent plea for the European Union to rediscover its founding principles of “bridging divisions and fostering peace and fellowship.”

Many factors gave urgency to his words. Europe is grappling with soaring unemployment in the midst of global economic instability and the relentless problems of the euro zone. There is a war within its own borders while brutal conflicts on other continents affect the security of European nations and citizens. The interlocking challenges are compounded by voters’ dwindling trust in the political classes. In speaking to members of these classes, the Pope aimed, he said, “as a pastor to deliver a message of hope” to “a Europe that gives the impression of feeling aged and weary.” A glance around the chamber — built as a hemicycle to encourage members of the Parliament from different political groupings to see each other not as opponents but colleagues — reinforced just how timely that papal message was and the extent to which politicians have become, like the Catholic Church in its darker periods, part of the problem as well as its solution.

Pope Francis emphasized the centrality of human dignity and the equal value of every life. He did so to an assembly of 751 MEPs and other European officials that severely underrepresents the diversity of European populations — only 36.75% of lawmakers are women and only about 5% are from ethnic minorities — while substantially representing views that the Pope singled out for criticism. “One of the most common diseases in Europe, if you ask me, today is the loneliness of those who have no connection to others,” he said. This phenomenon could be observed among the isolated old and the alienated young, the poor and “in the lost gaze of the migrants who have come here in search of a better future.”

“Unity doesn’t mean uniformity,” the guest speaker told an audience overwhelmingly composed of middle-aged white men in suits. “In point of fact all real unity draws from the diversities that make it up.” To that audience he set out a list of priorities. It was, he ventured, “intolerable that people are dying each day of hunger while tons of food are thrown away each day from our tables.” He won a round of applause with a call “to promote policies that create employment but above all it is time to restore dignity to work by restoring proper working conditions.” He also highlighted Europe’s failure to achieve “a united response to the question of migration. We cannot allow the Mediterranean to become a vast graveyard. The boats landing daily on Europe’s shores are filled with men and women who need acceptance and assistance.”

Listening to him were members of mainstream parties who have contributed to that failure and representatives of fringe parties — now achieving such electoral success that they may not for much longer remain on the fringes — who are arguing for the dissolution of the European Union and the turning away of migrants. It seems unlikely that members of the U.K. Independence Party (UKIP), or France’s hard-right National Front party will have been swayed by his words any more than Ian Paisley, at the time the apparently implacable voice of Northern Irish Protestant loyalism, could be persuaded to give a fair hearing to Pope John Paul II’s 1988 speech to the European Parliament, the last such address by a Pontiff to the body until Francis took the floor.

Eventually, however, Paisley did learn to stop bellowing and to prize peace above division, at least to some extent. European history is full of such encouraging examples alongside its gloomier lessons. Pope Francis reminded Europe of its capacity for good. In so doing, he continues to reassert the capacity of his office to do the same. 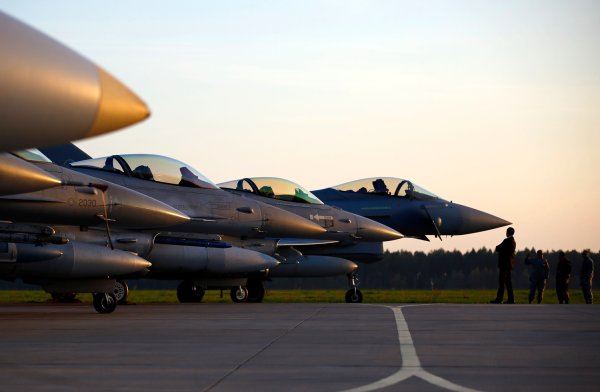