By Per Liljas / Hong Kong

The site, on the teeming Kowloon peninsula, is one of three urban locations that have been occupied for almost two months by protesters demanding free elections for this city of 7.2 million.

Workers in white hard hats started taking down barricades at the intersection of Nathan Road and Argyle Street on Tuesday morning. Many activists did not resist but simply retreated with their tents and belongings to the main part of the site, which stretches for several blocks down Nathan Road and remains untouched. However, scuffles also broke out, pepper spray was used and about a dozen protesters were arrested for obstructing the bailiffs in their work, including Liberal Hong Kong politician Leung “Long hair” Kwok-Hung.

One-way traffic has now resumed on Argyle Street, but protesters and onlookers have spilled into adjoining roads. Police presence remains high in the area, with officers warning people to leave. Further clearance operations are expected in the coming days.

This morning’s action was taken in order to enforce a civil injunction granted to a bus company and two taxi companies, who successfully argued in court that the barricades at the intersection were obstructing their business.

Similar legal means were used last week to force the removal of some barricades at the fringes of the main protest site in the Admiralty district of Hong Kong Island.

Critics of the authorities say the reliance on private litigation to restore order is a sign of the government’s weakness.

“I think this is a political problem that the government is not solving with politics,” said a 50-year-old retiree, who only identified himself by his surname Lim.

Unique among Hong Kong’s three protest sites, Mong Kok is not just a commercial area but a high-density residential neighborhood as well.

Currently dozens, perhaps hundreds, of colorful tents still festoon both sides of Nathan Road, completely blocking the main thoroughfare through the district. Protesters have set up a study area, makeshift library, supply tents, first-aid posts and even an elaborate altar to the martial deity Guan Yu.

Many of the area’s mostly blue-collar residents have complained bitterly about the disruption the protest is causing to their daily lives, generating heated arguments and scuffles with the protesters on a daily basis. The area is thus seen as the “front line” of the Hong Kong protests and attracts a more radical brand of demonstrator than the other protest zones, as well as their more vociferous opponents.

For these reasons, any attempt to clear the Mong Kok site completely could easily spill over into clashes.

On Oct. 17, police cleared the site in the morning, only for thousands of supporters to reclaim it after nightfall. That night, and ones before that, were marred with scattered violence.

“If they remove this roadblock, we will come back soon,” said a nurse who identified himself as Siu at the protest site in Mong Kok.

While recent polls have shown that a majority of the city’s residents now think that the occupations should end, it appears that large numbers of protesters have no intention of withdrawing.

— With reporting by Helen Regan and David Stout / Hong Kong 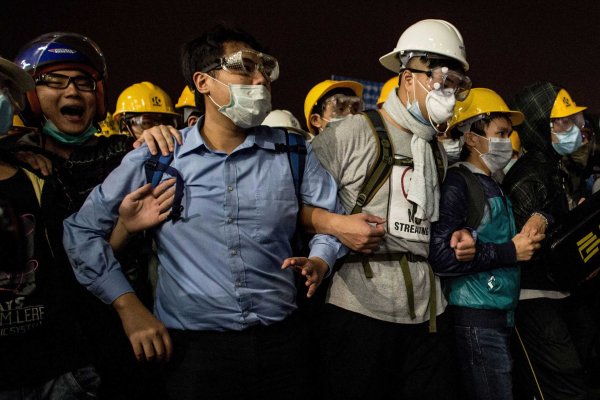 Hong Kong Protest Sites Hit By 'Largest Cyberattack Ever'
Next Up: Editor's Pick