It’s finally the finale of Dancing With the Stars. But before we get to the dance-floor action, this post owes a debt of gratitude to The Hunger Games: Mockingjay — Part 1 for illustrating the proper punctuation for a two-part finale. May the odds be ever in grammar’s favor or something.

Tonight the finalists — YouTube star Bethany Mota, Pretty Little Liar Janel Parrish, Fresh Prince forever Alfonso Ribeiro and Duck Dynasty scion Sadie Robertson — perform two dances, one chosen by the judges and one freestyle. Tonight one couple goes home and tomorrow one of them will take home the Mirror Ball Trophy. It’s all very exciting, much like The Hunger Games: Mockingjay — Part 1, but with more backstabbing.

Here’s what happened on Dancing With the Stars: The Finale — Part 1:

Bethany Mota and Derek Hough: Bruno Tonioli wanted to see a repeat performance of Derek and Bethany’s jive to Taylor Swift’s “Shake It Off,” and while there’s undoubtedly some calculus to the judges’ decisions, it’s easiest to believe Bruno, like the rest of us, has had that song stuck in his head for the past three months. There were some technical difficulties (the fake bedroom didn’t move quickly enough!) that affected the dancing a bit (timing!), and the judges had no problem dinging the couple for those issues, which seems unfair, but also very finale-appropriate. Derek tried to make amends by complimenting everyone (except his sister) before they handed out scores. 36/40

Sadie Robertson and Mark Ballas: Len Goodman opted to see Sadie and Mark’s Duck Dynasty–themed samba, because he was off judging the weirdly named Strictly Come Dancing when they performed it the first time. The real highlight came when Sadie had to barf in a bucket due to nerves. Just kidding! That wasn’t the highlight, it was when Liam Payne from One Direction showed up to rally votes for Sadie. (He’s a longtime supporter of the Robertson family, even tweeting his support when Robertson’s grandfather equated homosexuality with bestiality.) When she wins, you can either blame the Directioners or the fact that 25 of her family members are in the audience. Carrie Ann Inaba admitted that she didn’t think Sadie would be in the finale, but has learned to appreciate her skill. 38/40

Janel Parrish and Val Chmerkovskiy: Janel and Val have a disadvantage because Janel was too busy on the set of Pretty Little Liars, which [SPOILER ALERT] doesn’t make much sense as Mona was [SERIOUSLY, SPOILER ALERT] very dead at the end of last season. What the heck was she doing on set? Hurry up new season! [END SPOILER ALERT]. Anyway, they were three days behind in rehearsals for the samba that Julianne Hough assigned them. It was one of their lowest-scoring dances during the season, and Janel was excited to redeem herself. However she injured her rib during rehearsal and had to samba through the pain. She still managed to get a 10 from Len, which is all she wanted for Christmas. 37/40

Alfonso Ribeiro and Witney Carson: While Janel had a rib injury and Sadie puked in a trash can, Alfonso still reigns supreme when it comes to body ails. The man was crying from pain on camera last week, after all, so he holds on to that crown. Regardless of his pain, Carrie Ann assigned him a repeat performance of the fast-paced jive. His routine was solid weeks ago, and it was downright dazzling in the finals, despite his physical decrepitude. Carrie Ann almost whacked Len on the head in her enthusiasm and Len compared Alfonso to Frank Sinatra, which is not exactly true but an impressive hyperbole nonetheless. 40/40, and Alfonso thanked all his doctors.

Bethany and Derek, freestyle: Bethany went Mad Max in her final routine (if Mad Max wore sparkles), but held her own in the Thunderdome against the troupe members who helped round out the routine. It was dramatic, dynamic and the perfect ending to the season for the YouTube star. 40/40, for a total of 76/80

Sadie and Mark, freestyle: For some reason Mark decided that their final routine should be Super Mario Bros.–themed, because why not? It is Dancing With the Stars after all, so you may as well slap on some mustaches, bedazzle Mario and Luigi, find yourself a full-size ’shroom and send them all out onto the dance floor to completely entertain your fans and bewilder Len. Julianne dubbed it “the cutest thing she had ever seen.” Bruno said it was “original and refreshing.” Even Len thought it was memorable. 40/40, for a total of 78/80

Janel and Val, freestyle: Janel said they wanted to keep their final routine “just Val and Janel,” which meant a slow, smoke-filled, sensual routine to the theme from Friends. (Val is such a Joey, amirite?) Bruno dubbed it “hypnotically beautiful.” Carrie Ann said the routine “went inside” and “changed them” (she’s such a Phoebe). 40/40, for a total of 77/80

Alfonso and Witney, freestyle: Alfonso and Witney’s routine started out as an old-timey jazz number that was reminiscent of their jive, but this time they were wearing black and white instead of taupe, and Alfonso stopped and did a tap routine in the middle of the performance. It was tight and impressive, and Alfonso didn’t seem to aggravate his groin or feel the need to say the word groin even once. 40/40, for a perfect 80/80

Best reason to come back tomorrow: Somebody gets to try and fit the Mirror Ball Trophy in their Uber! 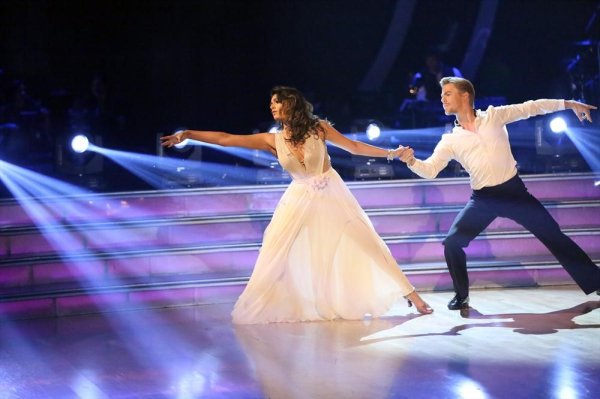 <em>Dancing With the Stars</em> Watch: The Semifinals Unplugged
Next Up: Editor's Pick