Cleveland Browns quarterback Johnny Manziel and his entourage were involved in a fight in a Cleveland hotel and apartment building early Saturday morning, according to a police report obtained by Cleveland Scene.

No arrests were made in the incident, and Manziel is not listed as a suspect in the police report.

According to the report, when police arrived at the Metropolitan at the 9 at 2:36 a.m., the alleged victim, 33-year-old Chris Gonos, told them that he had been assaulted by “Johnny Football and his entourage.”

The report says that while waiting for an elevator with his girlfriend, Gonos saw a man he believed to be Manziel and approached him, telling him, “I’m the biggest Browns fan ever, I love you, I want to give you a hug.” Gonos says at that point he was struck in the face several times by a man who was with Manziel.

Several other men then allegedly “pushed and attacked” Gonos until a hotel staff member broke up the fight. The staff member was also hit in the face. The alleged offender said Gonos attempted to assault his “client,” apparently referring to Manziel.

Gonos told Cleveland Scene that his brother tackled Manziel and another member of his group “smashed” Manziel in his face.

According to Gonos, Manziel retaliated by “sucker punching” Gonos’ brother while he was being held by a security guard. ESPN’s Jeremy Fowler, who also obtained the police report, said there is video footage of the incident.

The general manager of Metropolitan at the 9 told Cleveland Scene that he had no comment on the incident. According to the magazine, “many” Cleveland professional athletes live in the building.

Manziel, selected by the Browns in the first round of this year’s NFL draft, has made headlines in the past for off-field incidents. Before his redshirt freshman year at Texas A&M, Manziel was arrested and charged with failure to identify, disorderly conduct and possession of a fictitious driver’s license after being involved in a fight. He later pleaded guilty to the former charge. He was fined $2,000 as part of a plea deal and had a two-day jail sentence waived because he was placed in jail after his arrest.

Manziel lost out to Brian Hoyer for the Browns’ starting quarterback job in training camp. He has appeared in two games this season, attempting one pass. 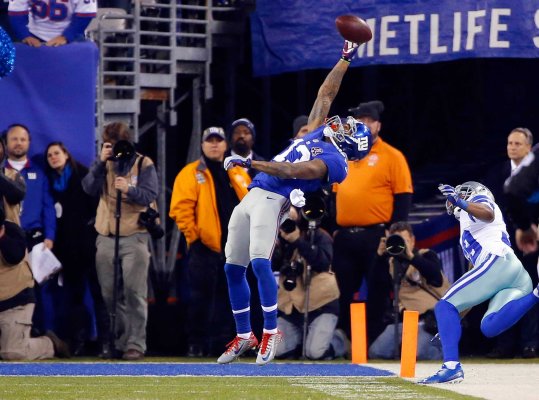 Watch This Ridiculous 1-Handed Touchdown Catch
Next Up: Editor's Pick