The Empire State Building was lit up orange Monday night, but the color wasn’t a reference to a Thanksgiving pumpkin pie. It was to mark Nov. 25 as the International Day for the Elimination of Violence Against Women, which hits its 15th anniversary this year.

The International Day for the Elimination of Violence Against Women isn’t just a single day — it’s the beginning of 16 Days of Activism Against Gender Violence, which culminates on Human Rights Day on Dec. 10. The days are meant to “symbolically link violence against women with human rights, and to emphasize that such violence is the worst form of violation of women’s human rights,” explains Lakshmi Puri, Assistant Secretary-General of the U.N. and Deputy Executive Director of U.N. Women. “Violence against women is one of the most tolerated violations of human rights. It’s unacceptable.”

And Nov. 25 wasn’t randomly chosen. Though the day now addresses the issue of violence against women everywhere, its story starts with one particular — and particularly brutal — act.

The International Day for the Elimination of Violence Against Women was started in 1999 to commemorate the Mirabal sisters, political activists in the Dominican Republic who were assassinated on this date in 1960 for opposing dictator Rafael Trujillo. The three sisters started an anti-Trujillo group called the Movement of the Fourteenth of June, named after a massacre reportedly ordered by the dictator. They called themselves, “Las Mariposas,” or “the butterflies,” and openly protested Trujillo and his regime. To retaliate, his henchmen beat the sisters to death in a cane field and faked a car accident to explain their deaths.

Puri says the day was chosen to commemorate the Mirabal sisters’ courage in taking political action despite the brutality they faced. “Violence against women in politics is also a very particular form of violence, to intimidate them so they don’t engage in politics,” she says.

The 16 Days of Activism are meant to raise global awareness of the violence endured by women and girls around the world, Puri explains. The 16 days will include marches, marathons and other public activism to promote gender equality and improve the lot of women everywhere. According to U.N. estimates, 35% of women in the world have experienced physical or sexual violence, 700 million women alive today were married as children and more than 133 million girls and women have experienced female genital mutilation. The U.N. estimates that in 2012 over half of murdered women were killed by partners or family members, and that 120 million girls worldwide have been forced to have sex at some point in their lives. “Together, we must end this global disgrace,” UN Secretary-General Ban Ki-Moon said at a ceremony before the lighting of the Empire State Building.

“It’s a very difficult issue to tackle without a mindset change,” Puri says, adding that the 16 Days of Activism are intended to challenged the entrenched gender inequality in most societies. Activists in Mexico City will run a marathon to end the violence, a film series about women’s lives will be screened in Uganda and public spaces in India will turn orange to support the cause. But do any of these actions really help women who are trapped in forced marriages or subjected to brutal violence? “It creates a culture of zero tolerance,” she says. “It creates awareness, it shows the determination of people, and it becomes the new normal.”

The day has been celebrated every year since 1999, but it takes on extra significance this year. It’s not just the 15th anniversary of the first The International Day for the Elimination of Violence Against Women, but it’s also an occasion to look forward to 2015, which will mark 20 years since the groundbreaking Beijing Platform for Action. That’s where Hillary Clinton made her famous speech saying, “human rights are women’s rights and women’s rights are human rights.”

The U.N. is also taking greater steps to include men in their mission to elevate global women, with their He for She program launched this year. Puri says they’re trying to challenge the idea “that it’s a right of a man to be violent and that it’s the fate of the woman to be subjected to violence.” 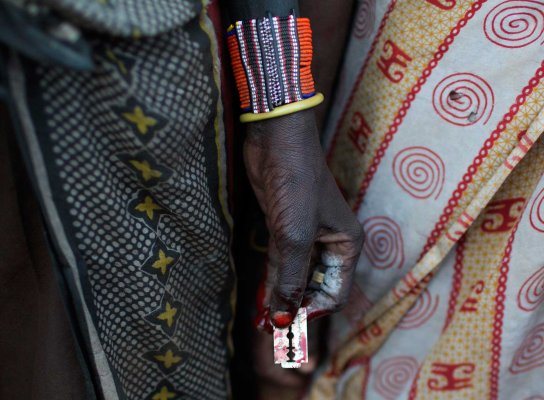 Violence Against Women 'Epidemic,’ Study Says
Next Up: Editor's Pick