Less than a week after rebuffing civil libertarians over a National Security Agency reform bill, Sen. Rand Paul (R-Ky.) has divided them over a new draft to declare war against the Islamic State in Iraq and Greater Syria and strip the authority President Obama uses to fight terrorism across the Middle East. Paul released his draft Monday and intends on introducing it in December.

The measure would set unprecedented limits on the Obama Administration, defining ISIS as the enemy and limiting ground combat forces to protect U.S. armed forces from “imminent danger,” attack “high value targets” and advise intelligence operations. The authorization only lasts for a year before Congress would have to re-up it.

The chances of the bill passing the president’s desk are slim, so to say—Congress has not declared war since World War II—but it is interesting as it puts a likely Republican presidential contender on the same side as the New York Times editorial board on the question over whether or not the U.S. needs to act under a new legal authority to fight ISIS while dividing civil libertarians.

Some civil libertarians, angered by Obama and former president George W. Bush, who used authority granted by Congress in 2001 and 2002 to fight the War on Terror years later, praised the measure as an attempt to finally restore the checks and balance system.

“It is the most muscular and assertive use of congressional authority under the Constitution of any of the proposals that are out there so far,” says Chris Anders, a senior legislative counsel in the American Civil Liberties Union’s Washington Legislative Office. “We have a president deciding on his own once again to take the country to war without following the Constitution.”

Anders said that Paul could be more specific in defining the objective, enemy and geographic limitations, but thinks that with additional information and hearings Paul can tighten up his draft.

“I think given the information that is available right now, that’s probably about as good as you can do,” he said.

While Paul will face fierce opposition from the scores of defense hawks on Capitol Hill, he is not alone in providing the Administration with new authority to fight ISIS. A spokesman for Democratic California Rep. Adam Schiff, who has pushed along with Sens. Tim Kaine of Virginia and Robert Menendez of New Jersey for new congressional authorization, found a few things he liked in Paul’s plan, including the new limits on the length of the mission and how troops are used.

“Senator Paul’s resolution tracks the bill introduced by Rep. Schiff in key respects—repealing the 2002 authorization, sunsetting the new authority and the 2001 authorization contemporaneously, and limiting the use of ground troops against [ISIS],” says Patrick Boland, Schiff’s spokesman. “While the limitations on ground troops differ in key respects, Senator Paul’s bill is another important contribution to the debate over a new war authorization and adds support to the effort Senator Kaine and Schiff have been making to press for a Congressional debate and action on this key issue during the lame duck session—hopefully his entry into this debate will help jumpstart the conversation on a new authorization which should begin immediately.”

But Paul will face criticism from a vast array of viewpoints—from the Administration and foreign policy hawks to noninterventionists and civil libertarians, who are still smarting over Paul voting “nay” last week to debate a bill to reform the National Security Agency after arguing that it didn’t go far enough. Anders called it a “real mistake” and the “best opportunity this year to rein in the surveillance program.” He added, however, “we have to deal with these issues one at a time.”

Paul could be in more trouble with other civil libertarians on the proposed declaration of war. The libertarian magazine Reason published an article Monday criticizing the lack of “meaningful restraint” for ground forces, noting the “slippery-slope nature of American military adventurism.” And John Mueller, a senior fellow at the libertarian Cato Institute, told TIME that Paul would be better positioned as a noninterventionist, or as he calls it, on the “side of the angels.” Despite the viciousness of ISIS, Mueller believes that the threat has been “massively exaggerated” and that the notion of Islamic militants threatening the security of the United States is “vastly overblown.”

“If he really wanted to be smart on the merits of it politically, he could be the only candidate opposing getting involved in another miserable war in the Middle East,” says Mueller of Paul.

“The danger with declaring war is that you’re stuck with it,” he said. “That’s a real disadvantage.” 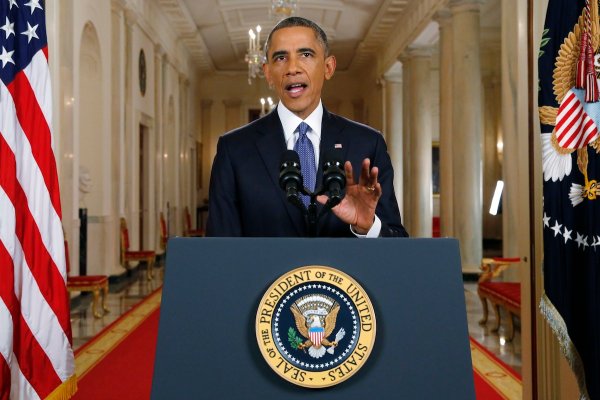