It’s a tragic story that is all too familiar. This one began on Nov. 22, when a 12-year-old boy named Tamir Rice was playing in a Cleveland park and waving what appeared to be a weapon. Someone called the police and reported that “a guy with a gun was pointing it at people,” but noted that the gun was “probably fake.” According to local news reports, some of that information may not have been passed on to the officers who were dispatched to the scene, who had been told to respond to “a male with a gun threatening people.”

Here’s what happened next, according to the Northeast Ohio Media Group:

Rice died from the officers’ shots. It turns out what he had in his waistband was a BB-type novelty gun with the orange safety cap removed. The Cleveland police department, which said the toy was “indistinguishable” from a real gun, according to the New York Times, is investigating the shooting. The officers who responded have been put on administrative leave.

Rice’s death is the most recent example of what can happen when police mistake a play weapon for a real firearm. Last year, police officers in Santa Rosa, Calif. fatally shot a 13-year-old named Andy Lopez while he walking to a friend’s house — carrying what appeared to be an AK-47 assault rifle, but which was actually an airsoft gun that didn’t have the legally required orange marker. Lopez’ death, which led to several protests months after his death, helped gather support for a new law that changed how airsoft and BB guns are regulated in California, requiring that their entire exterior surface be painted a bright color or feature salient fluorescent strips.

On Sunday, an Ohio lawmaker announced that she would introduce similar legislation in the wake of Rice’s death. “With Saturday’s deadly shooting of a 12-year-old in Cleveland, it is becoming crystal clear that we need this law in Ohio,” State Representative Alicia Reece said in a press release, “to prevent future deadly confrontations with someone who clearly presents little to no immediate threat or danger.”

Rice’s death comes just months after a 22-year-old was fatally shot in an Ohio Walmart when police mistook an air rifle he was holding for a deadly weapon. In 2012, Texas police fatally shot an eighth-grader who had a pellet gun that resembled a Glock. The year before, Miami police shot and killed a 57-year old man who had a realistic replica gun after getting 9-1-1 calls about the ostensible weapon.

The federal government doesn’t keep ongoing statistics on the trend but, in a 1990 paper funded by the Bureau of Justice Statistics, police reported they had used or threatened to use force “in a confrontation where an imitation gun had been mistaken for a real firearm,” at a rate of about 200 incidents per year. The paper’s authors suggested this number was “significantly underreported.”

A series of toy gun-related deaths in the late 80s helped pass the federal amendment, sponsored by Republican Senator Bob Dole, requiring all toy, “look-alike” or imitation firearms to have a bright orange plug or other salient marking. But manufacturers don’t always adhere to required standards and, as in Rice’s case, markings can be altered or removed. Part of the appeal of imitation guns for some buyers, too, is that they look and feel like the real thing. “Best part about this rifle is the recoil felt when firing the gun,” reads the description of one product on an airsoft company website. “Each shot is accompanied by a satisfying solid jolt.”

California Governor Jerry Brown signed the Imitation Firearm Safety Act in September. “A toy should look like a toy and not a lethal weapon,” said State Senator Noreen Evans, a joint-author of the legislation who represents the Santa Rosa area. “Currently these copycat toys are manufactured to be virtually indistinguishable from real firearms. Toys should not get a child killed.” After news of Rice’s death over the weekend, another one of the bill’s authors, State Senator Kevin de Leon, said that he hopes other states follow suit: “The two recent tragedies in Ohio are unfortunate examples of a trend we will continue to see unless we change our laws to make imitation guns distinguishable from real firearms.”

Law enforcement officials stress that kids or adults who have imitation firearms may not grasp how much danger the play guns can put them in when members of the public or authorities see them. “We’re not trained to shoot people in the leg,” Cleveland Police Patrolmen’s Association President Jeff Follmer told the Northeast Ohio Media Group. “If we pull that trigger, we feel our lives are in danger.”

Speaking to TIME after Lopez’ death, a former federal law enforcement officer said police often have to make decisions based on first impressions. “In a stressful situation where it’s a question of using deadly force, you are not going to be able to get close enough to give a detailed inspection,” says Jim Yurgealitis, a former agent for the Bureau of Alcohol, Firearms, Tobacco and Explosives, who worked the streets of Baltimore for more than a decade. “Officers have to make a decision in milliseconds and everybody can second guess it.” 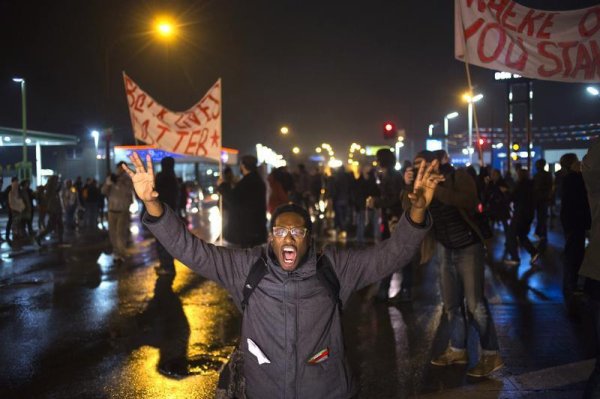 Ferguson Officer Darren Wilson Thanks Supporters After No Indictment
Next Up: Editor's Pick