Old Spice sure has a low opinion of poor old mom.

In their new ad, mom has nothing to live for her, but her little baby boy. So when Junior starts hosing himself down in Old Spice-scented masculinity and becomes a man—which, of course, means dating attractive young women—in that straight-out-of-Sophocles way, mom just can’t handle it. She starts weeping and wailing her so-called “Momsong” like a Greek chorus in mom jeans and growing extra-long arms to cling to her precious baby boy.

“Where’s my little boy, I miss him so/Who’s this man living in our home?/My special guy has turned into a man,” she sings, before collapsing on the carpet in a heap of tear-swollen misery. That’s when good old dad comes rolling in on his riding lawnmower, as stereotypical suburban dads are wont to do, singing his ode to the joy that his son isn’t living in a van down by the river and is instead getting some action under the hash-marked tagline “#SmellcomeToManhood.” Hey ad: Gross.

The ad is actually a follow-up to another spot for Old Spice’s line of lady-luring body spray for young men. The first ad, titled “MomSong”, is more of the same, because apparently clingy mothers, wailing over the fact that their sons are developing at an age-appropriate rate, is never not funny. In “MomSong” the beleaguered mothers become creepy stalkers following their sons on dates while sniffing (literally) their former babies who now “smell like a man.” (Note to future self: Please refrain from sniffing grown son.)

It’s unfortunate that Old Spice and Weiden + Kennedy, the agency hired to make the ad, which features music and lyrics by Bret McKenzie of Flight of the Conchords fame, felt the need to peddle in stereotypes that would have been outdated even in the Mad Men era. (It’s also unfortunate that they think people want to “smell manhood.”)

While it’s clear that it’s all meant as one big joke, the whole ad is just a giant eye roll. While it’s clear that moms are not the target demographic for scented body spray with manly names like Bearglove and Lionpride, moms still have to live in a world where mothers are treated like nothing more than overbearing, emotionally unstable, clingy women, instead of, say, human beings wondering why their teenaged son spent his allowance on a male perfume called “Lionpride.” You can do better Old Spice.

Hopefully their own mothers will have a little talk with them over the Thanksgiving dinner table. 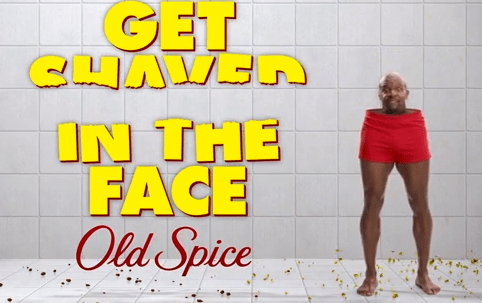