Dara Hill diligently scribbled notes as the principal of Detroit’s Nichols Elementary-Middle School led her and several of her neighbors on a tour of the school. A room for special education students was brimming with stuffed animals, but the hallways were sparsely decorated. Work displayed in the kindergarten classroom was charming and developmentally appropriate. But why were there six students sitting to the side during gym class?

Hill has two more years before she has to pick a school for her four-year-old daughter, but she and her husband are starting their search now because she is overwhelmed by the number of options in Detroit, and underwhelmed by the quality of many of them. To help with the decision, Hill joined The Best Classroom Project, a Facebook group formed to help parents navigate Detroit’s large and under-resourced school system. Since beginning in 2013, the group has grown to more than 250 parents, a mostly middle and upper-middle class mix of life-long residents and recent transplants. Several of them care about sending their children to public schools. And they are precisely the type of people Detroit school officials need to court as the city claws its way back from bankruptcy.

Thirteen years ago, Detroit’s school system had 200,000 students. Today, it has less than 50,000. It’s saddled with a $127 million deficit and its students perform well below the rest of the state. In the 2013-14 school year, for instance, just 14.6% of Detroit third-graders and 7% of city 11th-graders passed the state math test, according to Michigan education data. And graduation rates also lag. Sixty-five percent of students graduated from Detroit public schools in four years in 2012-13. The state average is 77%.

Such numbers make it tough to convince parents like Hill, a professor of education at the University of Michigan-Dearborn, to commit to the city’s public schools. A statewide school choice system allows students in Detroit to attend any school in the district or pick from dozens of charter schools, but it also lets them apply to suburban schools. And many families with the means choose to bypass the system entirely and send their children to area private schools.

Keeping middle class families in the Detroit school system is particularly important because there are only so many of them. About 38% of Detroit households earn more than $35,000 compared to 56% of households across America, according to 2012 American Community Survey figures published by the Census Bureau. For the city to grow its tax base, the schools need to improve. But to significantly improve, the school system needs more students – and the money that comes with them.

“We recognize we’re a central anchor to the city,” says Roderick Brown, the district’s chief strategy officer and the man charged with finding ways to convince more families to pick the public school system. “Our success is tied to the success of the city.”

Hill should be an easy mark for the school district. The daughter of German and Jamaican immigrants, she graduated from Detroit Public Schools in the 1980s and fondly remembers a time when black and white students would walk together to the Detroit Public Library after middle school. She met her husband in high school and stayed in the city after graduating, teaching first in the city and then in a nearby suburb.

She watched as Detroit continued a decline that began in the 1960s. And the city’s decades of struggle have been intertwined with those of the school system. Detroit Public Schools was first placed under state control in 1999 and then again in 2009 as test scores continued to falter. The district’s enrollment has fallen to 49,800 students as families moved or opted for charters that promised — but didn’t always deliver — better results. Nearly 40,000 students in the city now attend charter schools. Detroit Public Schools has shuttered more than 80 schools and the state has taken over 15 of the lowest performers in the past 5 years.

On top of that, in May, the district missed the deadline for applying for about $4 million in federal Head Start money because of technical problems. Officials said they would find money elsewhere to offer preschool to all students this school year, not just low-income ones, but to Hill, the incident is indicative of larger administrative problems. “There are things going on that are really good at many of the school levels, but as a district, it’s like, ‘Oh get it together,’” she said. “It just makes you wonder.”

The process of reassuring her begins in a conference room in the school system’s downtown headquarters that has been turned into a campaign-style war room. A translated quote from Sun Tzu’s “The Art of War” hangs on one wall, next to a poster titled., “THE QUESTION: How shall DPS compete and win the marketplace?” The answer: “Empowered DPS employee’s operating via synchronized, lean agile and leveraged work efforts.”

The business jargon is evidence of Brown’s time at General Motors, where he was a manager of strategic facilities planning at the nation’s largest automaker. He’s brought more than the lingo with him to DPS. Brown thinks in terms of markets and supply chains, and argues that along with improving academics, Detroit Public Schools also must improve the overall customer experience for students and parents. That’s why district officials invited Target to train school office workers in customer service. Among the tricks: smile when answering the phone to sound friendlier. “We didn’t do the best job of serving our existing customer base,” Brown says.

The effort to change that started in 2009, when then-Emergency Manager Robert Bobb launched an “I’m in” campaign encouraging families to enroll in Detroit Public Schools. Since then, improvements such as universal pre-kindergarten and increased test scores, have been advertised with flyers, open houses and old-fashioned door-knocking.

“You can’t win this on the defensive,” says Steve Wasko, the district’s assistant superintendent for community relations. “The only way to survive and thrive is to be on the offensive.”

The first step was trying to ensure basics like making schools safe. District officials gathered community volunteers to walk with children to school and are working with the city’s lighting authority to get broken streetlights near schools replaced before all of the other busted ones in town. And they designated 20 schools as community hubs, to be open 12 hours a day as resource-centers for parents.

The district has also launched new academic programs, including the three-year-old Benjamin Carson High School of Medicine and Technology, named for the retired Johns Hopkins neurosurgeon who attended Detroit public schools. Many students there said they returned to the district from charter schools because they were attracted by Carson’s small size and focus on science. Yet even Carson has struggled. In the spring, in the school’s first year of state testing, only 9% of 11th-graders passed the state math test and just 1% passed the science exam. They fared better in reading and writing, with about 40% considered proficient.

Similarly, music or art is now taught at every elementary school, but many schools can’t afford to offer both.

But there has been progress. Last fall, enrollment barely dipped after a more than a decade in which it dropped by about 10% every year. Daily attendance is up to 86%, which is meaningful for a system that in 2011 had to return more than $4 million in state funding for having an average daily attendance rate below 75%. And some schools have begun to make gains on state tests that outpace the rate of improvement in the rest of the state.

Three weeks before Hill and her peers observed classes at Nichols, a group of volunteers with the nonprofit group Excellent Schools Detroit wandered around two pre-kindergarten classrooms at Bow Elementary School in a heavily blighted neighborhood in the Northwest of the city. In one room, a handful of children gathered around an iPad, while another group paraded through the classroom playing tambourines and wooden blocks. The volunteers made careful notes as the lights flickered. The day before, the power had gone out entirely. (Some schools in Detroit lost as many as 13 days of school last year because of power outages caused by the city’s outdated electrical grid.)

Bow, where 86% of students receive free or discounted lunch, is emblematic of the obstacles DPS faces as it attempts to shed its poor reputation. The school was one of 29 to receive a D this year in the influential rankings published by Excellent Schools Detroit. Only one K-8 Detroit Public School got an A.

For parents in the neighborhood, with few resources to get their children to schools miles away or little knowledge of how to navigate the school-choice process, the only other option is a similarly low-performing K-8 charter school across the street, which Bow’s former principal, Ernestine Woodward says has been drawing away students for years. Last summer staff from Bow knocked on every door in the neighborhood trying to get families back.

The school is doing the best it can with the resources it has, says Woodward, who retired at the end of last year. There’s not nearly enough money for the technology she would have liked, nor for social workers and other services to meet the needs of her students. But they do have afterschool and arts programs and make an effort to get parents into the school whenever possible.

Yet with a reputation for poor performance, it’s a school that Hill would never consider. And Nichols is out of the running, too, even though it should have been a good option. Nichols typically performs at or slightly above average on state tests. And it’s a five-minute walk from Hill’s home in Indian Village, one of the few neighborhoods that look untouched by Detroit’s downturn. But Hill found the class sizes were too large, and she didn’t like that the English curriculum required teachers to follow a script. She’s now leaning toward sending her daughter to a private school, underscoring how difficult it will be for Brown and DPS to convince parents like her.

“Can the public schools really appeal to us?” she says. “I don’t know that they have the resources or the ability to do that right now.”

This story was produced by the Hechinger Report, a nonprofit, nonpartisan education-news outlet affiliated with Teachers College, Columbia University. 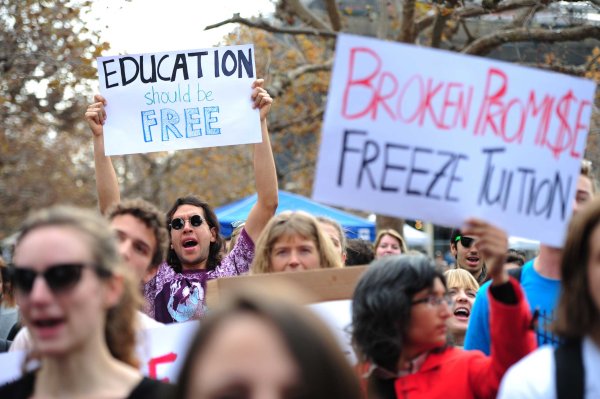