Why did the chicken cross the road? To avoid getting slammed by a car, plowed by a train or swept downstream by a raging torrent. At least, that’s the goal in Crossy Road, a new free iPhone game that’s destined to become the next Flappy Bird: A super-addictive, hard-as-heck game that you just won’t want to put down.

Crossy Road is what would happen if the evil geniuses who thought up Frogger built a new game for the mobile era. The idea is to take your character, whether it be a bird, duck, chicken or otherwise, and get it as far upfield as possible while dodging cars, trucks, trains, raging rivers and a pesky eagle that wants to make a meal of you — all while collecting coins as you go to unlock new characters. There’s no end goal to speak of, save making it further than you’ve ever made it before.

Crossy Road’s simplicity, along with its colorful visual palette and quirky soundboard, gives it the same appeal as Flappy Bird: You can play it for two minutes or two hours and love every second of it, either way. I downloaded it on a whim before the weekend, and ever since have found myself coming back to it every time I had a free second on the subway or couch. It’s the sort of game that, given a little love from its developers in the form of new features down the road, could remain a constant presence on my iPhone for a long time coming.

Still, Crossy Road isn’t totally free; it’s “freemium.” You can get more gold coins to unlock new characters by watching in-app video adds or straight-up paying for them with your hard-earned dollars. The prompts to watch those ads can be a little annoying, and I’d gladly pay a dollar or two for an ad-free version of the game. Still, while the various playable characters add some visual and audio variety, they don’t actually help you make it upfield any easier — so you can have just as much fun with Crossy Road if you don’t pump any money into it at all.

Crossy Road, from developer Hipster Whale, is now available on the App Store for iPhone and iPad. 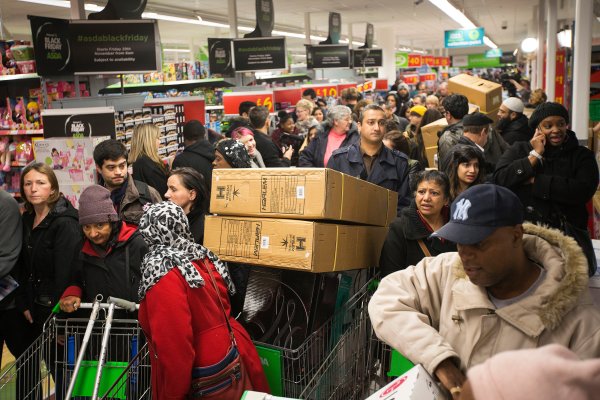 The 5 Best Apps for Dominating Black Friday With Your iPhone
Next Up: Editor's Pick