3 People Who Could Replace Chuck Hagel

Secretary of Defense Chuck Hagel announced his resignation after less than two-years on the job Monday after President Barack Obama asked for him to step-aside amid repeated disagreements and missteps.

According to administration officials, three contenders are at the top of the short-list to replace Hagel: Rhode Island Sen. Jack Reed, and former DOD officials Michele Flournoy and Ashton Carter. All have been considered and passed over for the post before.

A senior administration official said Obama would name a replacement to Hagel “in short order,” with Hagel remaining in the post until his replacement is confirmed by the Senate. Current and former officials said Obama will look both for someone who can avoid the communications troubles that plagued Hagel, as well as who is more adept to manage newly emerging threats like the Islamic State of Iraq and Greater Syria.

Hagel, a former Republican Senator from Nebraska who broke with his party on foreign policy issues, faced tough opposition from hawkish Republicans and some Democrats during his confirmation battle over concerns that he wasn’t supportive enough of Israel, and that was with a Democrat-controlled Senate.

Hagel’s performance during his confirmation hearing was resoundingly panned. Republicans will control the Senate beginning in January when the new Congress is sworn-in, further complicating Obama’s decision. With the extension of the Iran nuclear talks, one Republican Senate aide said the next Pentagon chief’s confirmation hearings are likely to become a proxy for concerns in both parties about the Iran negotiations.

A look at the short-list:

Rhode Island Sen. Jack Reed: Like Hagel, Reed was one of 23 Senators to vote against the Iraq War Resolution in 2002. A longtime member of the Senate Armed Services Committee, he has been considered for the Secretary of Defense position by Obama before, but has repeatedly stated he would rather be a Senator. With the retirement of Armed Services Committee Chairman Carl Levin, Reed is now in line to be the Ranking Member of the committee when the GOP-controlled Senate is sworn in next year. As a senator, he would likely face a smoother confirmation process than the others on the short-list, that is if he wants the job. A Reed spokesman said Monday morning that he’s not interested.

Michele Flournoy: The former Under Secretary of Defense for Policy, the number-three position at the Department of Defense, Flournoy was a top aide to former Secretaries Robert Gates and Leon Panetta before leaving the Pentagon in February 2012. Widely respected on both sides of the aisle, she is a founder of the center-left Center for a New American Security. Flournoy would be the first woman in the post, a historic element that some Obama administration insiders say would be appealing to the president. She also comes as a veteran of both Obama campaigns, and maintains close ties to the White House.

Ashton Carter: The former Deputy Secretary of Defense from October 2011 to December 2013, Carter was responsible for the day-to-day management of the department. During the Clinton administration he served as the Assistant Secretary of Defense for International Security Policy. Carter’s supervision of the department during a period of budget cuts earned accolades from both sides of the aisle when he stepped down last year. Like Flournoy, he was on the short-list of contenders to replace Panetta in 2012. 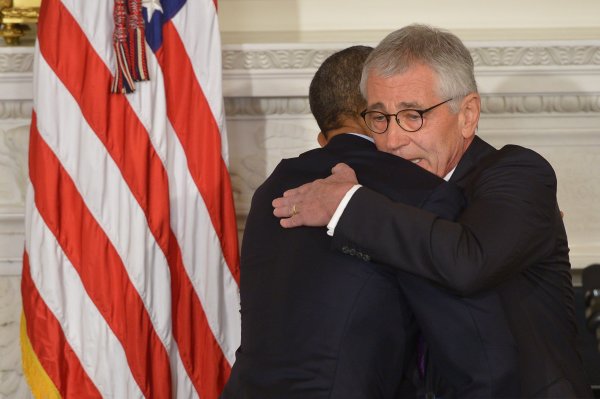 Why Chuck Hagel Resigned
Next Up: Editor's Pick