Hagel Retreats from Pentagon Under Fire

Defense Secretary Chuck Hagel is stepping down, after he and President Barack Obama concluded that his low-key style—despite his military experience in Vietnam—isn’t well-suited for the expanding war against the Islamic State of Iraq and Greater Syria (ISIS).

The sudden change at the top of the President’s national-security team comes after the Administration seemed slow to react to ISIS’s rise over the past year, and responded with what many inside the Pentagon and on Capitol Hill saw as a timid bombing campaign launched in August.

Some Hagel allies were quick to defend him, saying he was doing the job the way the White House wanted him to do it. But others said his languid style—on display during his lackluster confirmation hearing in January 2013—left him vulnerable to criticism from those who want a more aggressive military strategy.

The decision to seek a new top Pentagon civilian came after several weeks of discussion between Obama and Hagel following the Democrats’ shellacking in the mid-term elections. Hagel, as the lone Republican in Obama’s Cabinet, “began speaking with the President about departing the Administration, given the natural post-midterms transition time,” a senior Administration official said. News of Hagel’s departure was first reported by the New York Times.

Hagel, 68, served as an enlisted soldier in Vietnam, and was the first grunt to run the Defense Department. He served as a GOP senator from Nebraska from 1996 to 2008, and took over a Pentagon exhausted by 12 years of war and facing budget cuts, only to see conflict erupt in Iraq and Syria.

He quarreled with the White House’s National Security Council, especially over the best approach to deal with the three-year old Syrian civil war, which incubated ISIS. Hagel recently sent a memo to National Security Adviser Susan Rice arguing for more clarity on how to deal with Syrian dictator Bashar Assad. “Hagel was chosen for pliability,” former Army officer and scholar Ralph Peters says. “Yet, in the end he emerged as a man of conscience telling the President things he did not want to hear.”

Candidates to succeed Hagel include Ashton Carter, who has served as the Pentagon’s No. 2 civilian, and Michèle Flournoy, who would be the first woman to hold the job. Senator Jack Reed, D-R.I., also could be tapped, Pentagon officials say. Hagel plans to stay on until his successor is confirmed.

It was notable when Hagel testified alongside Army General Martin Dempsey, chairman of the Joint Chiefs of Staff, that Dempsey was the one who made news. While Dempsey overshadowed Hagel—particularly on the possible need to send U.S. ground troops in to fight ISIS—in part that was due to Hagel’s quiet demeanor.

Neither Hagel nor his associates had given any sign he was getting ready to leave the Pentagon after less than two years on the job.

Hagel conceded last week that the U.S. and its military is facing challenges well beyond ISIS, stretching from Iran to Russia. “If we’ve had such good policies over the years, then we probably wouldn’t be in this situation,” he told PBS’s Charlie Rose on Wednesday.

Two days later, Obama and Hagel decided it was time for the defense secretary to step down. 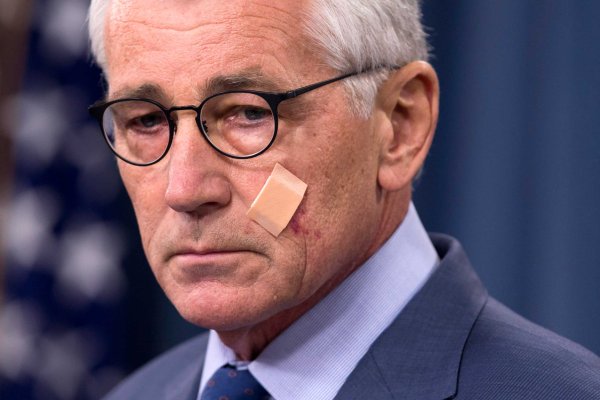 Pentagon Chief Stepping Down
Next Up: Editor's Pick