Father of 12-Year-Old Shot by Cleveland Police: 'Why Not Taze Him'

The father of a Cleveland boy who was fatally shot by local police on a playground Saturday raised questions about the use of live ammunition against his slain son on Sunday.

Police approached Tamir Rice, age 12, with weapons drawn, after a caller told emergency services a “guy with a gun was pointing it at people” in Cudell Commons Park, Cleveland.com reports. Police say Rice reached for the handle of a BB gun tucked into his waistband, which they mistook for a real weapon. The caller reportedly said on two occasions that the weapon was most likely a “fake.”

The responding officers fired two shots, one of which struck Rice in the abdomen.

“Why not taze him,” Gregory Henderson asked in a Sunday press conference following the shooting. “You shot him twice, not once, and at the end of the day you all don’t shoot for the legs, you shoot for the upper body.”

The department will open a lethal force investigation, which will be submitted to the prosecutor’s office within 90 days, officials said during a Monday press conference. They declined to release video footage capturing the incident on tape or to comment on the officer’s conduct, except to say that he was “very distraught” over what happened.

“The facsimile weapon in this incident was indistinguishable from a real firearm,” said police Chief Calvin Williams.

NBC reported Monday afternoon that a grand jury will hear the case.

Asked if the city was prepared for protests similar to the ones that shook the city of Ferguson, Missouri, Cleveland Mayor Frank Jackson replied, “Whatever comes, we’re prepared to handle it.” 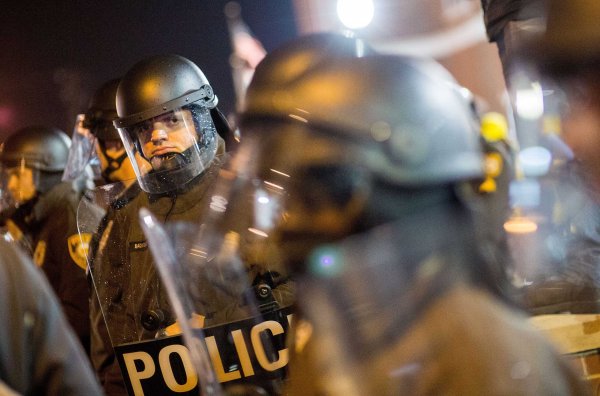 Ferguson Braces for Decision
Next Up: Editor's Pick