Secretary of Defense Chuck Hagel is resigning from the post after less than two years on the job, President Barack Obama announced Monday.

Obama said he was “reluctant” to see Hagel leave, though an Administration official told TIME that Obama had asked Hagel to resign. Obama said Hagel concluded it’s an “appropriate time for him to complete his service.” He will stay in his post until a successor is confirmed by the Senate.

“Over nearly two years Chuck has been an exemplary Defense Secretary,” Obama said during an appearance with Hagel at the White House. “Chuck is and has been a great friend of mine, since I was a green-behind-the-ears freshman senator,” Obama added.

Hagel called being Secretary of Defense “the greatest privilege of my life.”

An Obama friend dating back to their time opposing the Iraq War in the Senate, Hagel had difficulty interacting with members of Obama’s team and has been rumored to be on his way out for weeks.

In an interview with PBS last week, Hagel sidestepped questions about whether he would remain in the job. “First of all, I serve at the pleasure of the President,” Hagel said. “I’m immensely grateful for the opportunity I’ve had the last two years to work every day for the country and for the men and women who serve this country. I don’t get up in the morning and worry about my job. It’s not unusual by the way, to change teams at different times.

“I didn’t say I expect him to change,” he added under continued questioning. “What I’m saying is it wouldn’t be unusual to do that first of all historically. But second, I’ve got to stay focused on my job… and I do. And I am very fortunate that I have some of the best people in the world to work with and whatever the President decides, he’s the President, he makes those decisions.”

Asked if he still believed he had Obama’s confidence, Hagel said: “Well, I don’t think I would be here if I didn’t. But you’d have to ask him that. I mean I see him all the time.”

Hagel, the first enlisted man to rise to become Secretary of Defense, was seen by Obama aides as having difficulty staying on message and communicating the Administration’s positions clearly. Over the summer, White House aides were forced to walk back comments he made about the Islamic State of Iraq and Greater Syria (ISIS), in which he called the militant group an “imminent threat to every interest we have.”

One former Obama official was skeptical that dropping Hagel will improve the Administration’s foreign policy position. “Not sure what kind of Kool-Aid they are drinking if they think that getting rid of Hagel—and not the national security advisor who’s flailing to handle the [ISIS] problem—is going to make things better,” the former official told TIME.

Hagel faced a tough confirmation battle in 2012 and early 2013 when Democrats controlled the Senate.

“The bottom line is that he wasn’t set up for success by his team when he arrived at the Pentagon,” the former official added. “After a particularly tough confirmation process, instead of pushing the new Secretary to own the job inside the Beltway and in the public eye, his team took the opposite approach. Their goal was just not to make waves.”

His replacement will have to find support from the GOP-controlled Senate in the new Congress next year.

“Secretary Chuck Hagel honorably served the United States as a combat soldier, a U.S. Senator, and as Secretary of Defense,” Senate Minority Leader Mitch McConnell, who will become Majority Leader when Republicans take over the Senate next year, said in a statement. “We appreciate his service to the nation.

“It’s important to remember that Secretary Hagel’s departure comes at a moment of great peril for our country,” McConnell added. “His successor will confront the daunting challenges of: modernizing our conventional military forces to meet the challenges posed by Russia and China; restructuring the force after more than a decade of counterinsurgency warfare; maintaining our dominance in the air and at sea; investing in the next generation of weapons systems to preserve our nuclear triad; and combatting terror whether from Al Qaeda, associate forces, [ISIS], or other groups seeking to exploit the ungoverned spaces created by revolt and unrest. All of these challenges come at a time when the all-volunteer force faces a shortage of resources and investment. It is imperative that the next Secretary of Defense possess a sharp grasp of strategy, a demonstrated ability to think creatively, and the willingness and ability to work with Congress. And it is critical that the President consider these qualifications and challenges as he considers such an important nomination.”

Two former Department of Defense officials—Michele Flournoy, the former under secretary of defense and Ashton Carter, the former deputy secretary of defense—were runners-up to Hagel for the post when former Secretary of Defense Leon Panetta stepped down in 2012, and are seen as top contenders to be Hagel’s successor, according to administration officials, along with Rhode Island Sen. Jack Reed, who is in line to be Ranking Member of the Armed Services Committee.

“With the United States facing threats to our national security around the world, it is my hope that Senate Republicans will work with Democrats to give swift and fair consideration to President Obama’s next nominee to this critical post,” Senate Majority Leader Harry Reid, who will become Minority Leader next year, said in a statement lauding Hagel’s service.

Read next: Hagel Retreats from Pentagon Under Fire 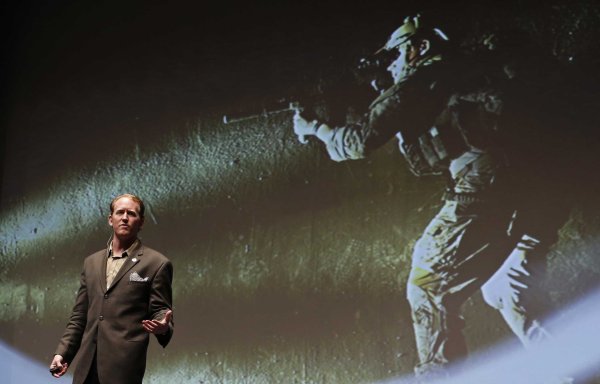 'A Difficult Secret to Keep'
Next Up: Editor's Pick