You've Heard of Shooting Stars, but This is Ridiculous

The idea that stars live in galaxies has been astronomy’s conventional wisdom since the 1920’s. It took a serious hit recently, though, when observers concluded that as many as half the stars in the universe might actually hover outside galaxies, flung off into the intergalactic void as collateral casualties when smaller galaxies merge to become large ones.

But while that discovery was startling, a new prediction posted online takes the finding to a whole new level. A significant number of stars, say Avi Loeb and James Guillochon, of the Harvard-Smithsonian Center for Astrophysics, should not just be floating through intergalactic space: they should be screaming across the cosmos at absurdly high speeds. “We calculate that there should be more than a trillion stars in the observable universe moving at velocities of more than a tenth the speed of light,” says Loeb. That’s about 67 million m.p.h. (108 million k/h). And about ten million of those stars, he says, are moving at least five times faster than that.

High-velocity stars are not without precedent. Astronomers already knew of a handful of stars in the Milky Way that are moving at a million m.p.h (1.6 million k/h) or so, and which should eventually leave our galaxy. But this new class of speedsters—if they’re confirmed—would make those so-called hypervelocity stars look like garbage trucks lumbering along in the cosmic slow lane.

There’s reason to hope that the findings are validated, beyond the mere wow factor of the work. Astronomers currently study the origin and development of the universe by trapping particles in telescopes and detectors—photons of light, mostly, and also, more recently, the ghostly particles called neutrinos, which bear information about the stars, galaxies and quasars in which they originated. Superfast stars would be another sort of “particles,” albeit huge, shining ones, which could tell astronomers plenty about the conditions they’ve encountered since they escaped their galactic homes. “They give us the opportunity to do cosmology in an entirely new way,” he says, “with massive objects moving at near lightspeed across the universe.”

How they got moving so fast is the core of Loeb’s and Guillochon’s idea. Most galaxies harbor huge black holes in their cores, and when two galaxies merge to form one, those black holes end up circling each other in a tight do-si-do. Eventually, they too will merge into a single object, but as they approach each other, the complex gravitational interplay between them and the stars that orbit them exerts incredible force—and impart incredible speed. (Black hole interactions also give rise to hypervelocity stars within the Milky Way, but here there’s just a single black hole, and thus a lot less energy available.)

As the free-range, extra-galactic stars fly across the universe, their trajectories are bent by the gravity of galaxies they pass along the way. “It’s like a ball moving through a pinball machine,” says Loeb. “If we can reconstruct their trajectories back to their original host galaxies, we can test whether General Relativity [Einstein’s theory of gravity] acts the way we expect.”

You can do this only if you actually find the speeding stars—but Loeb is convinced it’s possible. “It’s challenging,” he admits, “but they could be detected with upcoming instruments.” Among them: the Large Synoptic Survey Telescope, the James Webb Space Telescope, the Thirty Meter Telescope and more, all of which are expected to come online by the end of this decade.

“The most exciting aspect,” Loeb continues, is that these need not be single stars.” They could be double stars, or even stars with planets. “If these planets are habitable,” says Loeb, “these would be the most exhilarating roller-coaster rides in the universe.”

While none of this can happen in our own galaxy at the moment, that’s just a temporary situation. The giant spiral galaxy M31, also known as Andromeda, is slowly approaching the Milky Way. In two billion years or so, they’ll smash together. When they do, the new, gigantic galaxy that emerges will at last be equipped with the twin black holes you need to build a cosmic slingshot.

What happens after that is anybody’s guess. 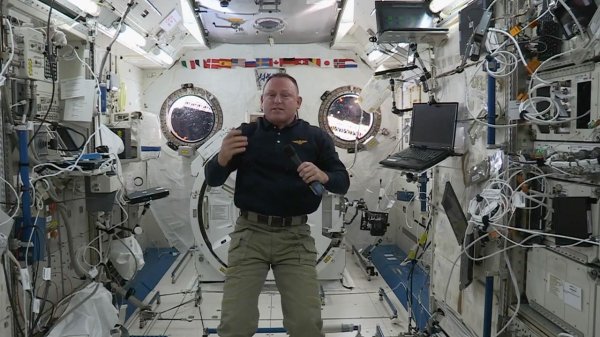 See What Astronauts Eat for Thanksgiving Dinner in Space
Next Up: Editor's Pick