Kerry: We Stand With Ukraine's People

From Left: Vitali Klitschko, the head of the Ukrainian UDAR (Punch) party, Ukrainian businessman and politician Petro Poroshenko, U.S. Secretary of State John Kerry and Ukrainian opposition leader Arseniy Yatsenyuk prior to a meeting during the Munich Security Conference at the Bayerischer Hof Hotel in Munich, on Feb. 1, 2014.
Brendan Smialowski / AFP / Getty Images
By Sam Frizell

Secretary of State John Kerry met with Ukrainian government officials and opposition leaders Saturday, voicing the United States’ support for the opposition’s goals even as protests raged in Kiev and across the country.

On the sidelines of the Munich Security Conference, Kerry told Ukrainian opposition leaders Vitali Klychko, Arseniy Yatsenyuk, and Petro Poroschenko that they have the backing of the United States.

The United States supports the “democratic, European aspirations” of Ukrainians, Kerry said, according to a senior State Department official, and endorses the opposition leaders’ efforts “to defend democracy and choice for the people of Ukraine.”

In his speech to the Munich conference, Kerry said the U.S. and European Union “stand with the people of Ukraine,” reports CNN.

Kerry’s comments come as the turmoil in Ukraine reaches its peak, with violent demonstrations consuming large parts of the capital and the legal status of anti-government demonstrations bitterly disputed by both sides. After several days of hedging, President Yanukovych signed two conciliatory bills Friday, one that provides general amnesty for protestors and another that rolls back recent restriction on the right to assembly.

Kerry urged the government to soften its hardline stance in a separate meeting with Ukrainian Foreign Minister Leonid Kozhara.

He voiced concern about human rights issues in Ukraine, saying the government should release prisoners, reform political structures to protect democratic checks and balances, and “form a technical government that can address Ukraine’s economic problems and meet the European aspirations of its people,” said the official.

Four protestors have died in the demonstrations, and hundreds arrested. There have been recent reports of kidnappings and torture by the administration, and protestors have reported a series of disappearances.

Demonstrations began in Kiev when President Yanukovych reneged on a trade agreement that would have brought the country closer to the E.U., in favor of an agreement that strengthened ties with Russia and included a much-needed $15 billion loan. With Ukraine’s future uncertain, Russia has halted its disbursements at $3 billion, though it is now seeking to reassert its authority in Kiev.

–with reporting by Zeke J Miller 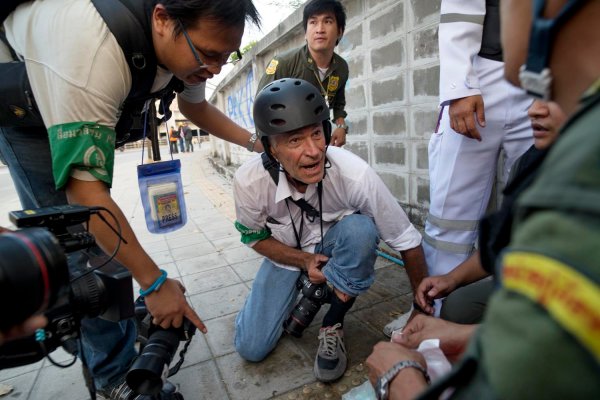 American Photojournalist Shot In Thai Violence
Next Up: Editor's Pick