Facing the Dallas Cowboys on Sunday Night Football, Beckham leaped high and behind himself to haul in a touchdown pass from Eli Manning — with Brandon Carrdraped all over him, and with only one hand. Carr was whistled for defensive pass interference, which the Giants declined after the touchdown was upheld on review.

That touchdown was Beckham’s second of the day, and it gave him four receptions for 71 yards. With the score, the Giants went up 14-3 on the Cowboys early in the second quarter.

Since making his NFL debut in Week 5 against the Atlanta Falcons, Beckham has become a savior for a Giants offense decimated by injuries. With Victor Cruz out for the season with a torn patellar tendon in his right knee, Beckham posted at least 93 receiving yards in three of his first six games, also catching at least six passes in each of those three games (New York’s last three games vs. Indianapolis, Seattle and San Francisco).

The Giants entered the game 3-7, a half-game ahead of the Washington Redskins for last place in the NFC East. The Cowboys (7-3) are neck-and-neck with the PhiladelphiaEagles (8-3) for the division lead. 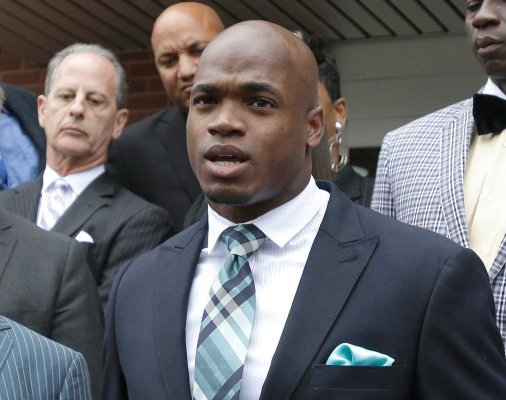 NFL Suspends Adrian Peterson For Season
Next Up: Editor's Pick