Here's Why the Detroit Lions Always Play on Thanksgiving

On Thanksgiving Day, at 12:30 p.m., the Detroit Lions will host the Chicago Bears.

Which, of course, is just a variation on what they do every single Thanksgiving. Football fans will note that the Lions, as well as the Cowboys, host on Thanksgiving every year — and, in fact, the Lions hosted the Bears on the very first Thanksgiving NFL game the team ever played, in 1934.

According to the Pro Football Hall of Fame, playing football on Thanksigiving wasn’t exactly new when the Lions moved to Michigan from Ohio that year. But at the time, college and high-school ball were far more important to American culture than the NFL was; at that point, TIME reported that NFL games were “less colorful than college football and lacking cheering sections, mascots and goalpost scuffles.” (And that’s even though some teams gave away tickets, rather than selling them, in order to fill the stands.) Accordingly, college and high-school teams were the ones that established it as a big day for the sport.

But, in 1934, the owner of the Lions decided to see if he could get his new team noticed, so he scheduled one of the team’s most important games for the holiday, even though there was no tradition of Thanksgiving football in Detroit at the time. The Lions went into the game with a 10-1 record; the Bears were 11-0. The promise of a late-season chance to tie for first in the league, and the opportunity to see it happen on a day off from work, helped tickets sell out. Though the Bears won, the Lions got to keep the tradition of hosting — not least because their owner, a radio executive, had made sure that the game was broadcast nationwide. During the last 80 years, the only Thanksgivings on which the Lions have not hosted were six seasons during World War II. The Cowboys started hosting on Thanksgiving Day in the 1960s and have done so nearly every year since; the NFL began to regularly include a third Thanksgiving game just a few years ago.

Within 20 years of that 1934 game, professional football started to surge past the college game — and the Lions were no longer the little-known team that started the tradition. In fact, they were good enough that a TIME cover story on Thanksgiving week of 1954 proclaimed them the best in the game:

That Thanksgiving — after the story went to print — they would go on to beat the Green Bay Packers 28–24.

Read the full story here, in the TIME Vault: A Pride of Lions 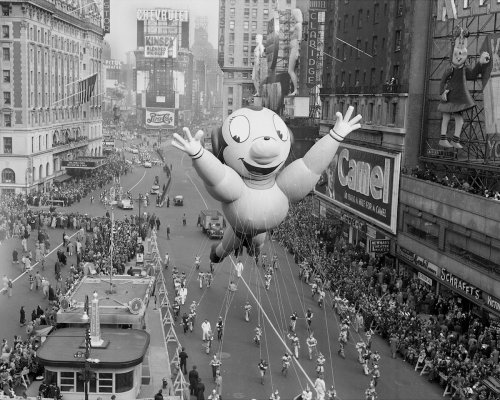