Two more women have spoken up publicly to say they were sexually assaulted by Bill Cosby.

CBS Pittsburgh spoke to Renita Chaney Hill, who alleges that as an actress on Cosby’s educational television segments, Picture Pages, in the ’80s, she was drugged and suspects that she was sexually assaulted by Cosby starting when she was 15. Hill says that at the age, she began an on-again, off-again relationship with Cosby, who would offer her drinks that Hill now believes were drugged.

“One time, I remember just before I passed out, I remember him kissing and touching me and I remember the taste of his cigar on his breath, and I didn’t like it,” Hill told CBS Pittsburgh. “I remember another time when I woke up in my bed the next day and he was leaving, he mentioned, you should probably lose a little weight. I thought that odd, how would he know that?”

Hill eventually ended the relationship when she was 19, despite Cosby paying for Hill’s college tuition.

Another woman, Kristina Ruehli, also alleges that she was drugged by Cosby when she was 22, working at a talent agency assistant at Artists Agency Corp, where he was then a client. Ruehli was one of the women named in Andrea Constand’s lawsuit against Cosby that was eventually settled.

According to an interview with Philadelphia Magazine, Cosby invited Ruehli to an after party at his house, who was surprised to find that she was the only guest when she arrived. After drinking the drink that Cosby offered to her, Ruehli found herself disoriented and losing consciousness.

“It was all foggy, and I woke up in the bed. I found myself on the bed, and he had his shirt off. He had unzipped his pants. I was just coming to,” Ruehli told Philadelphia Magazine. “He was attempting to force me into oral sex. He had his hand on my head. He had his cock out, and he had my head pushed close enough to it — I just remember looking at his stomach hair. And the hair on his chest. I had never seen a black man naked before.”

Ruehli said that she threw up and left Cosby’s house, and decided to come forward to add credibility to the sexual assault allegations that have been growing hour by hour.

“I don’t need money or aggravation,” Ruehli added. “I’m very wealthy, so I have nothing to gain. But I wanted to come forward to tell the truth to back up other people.” 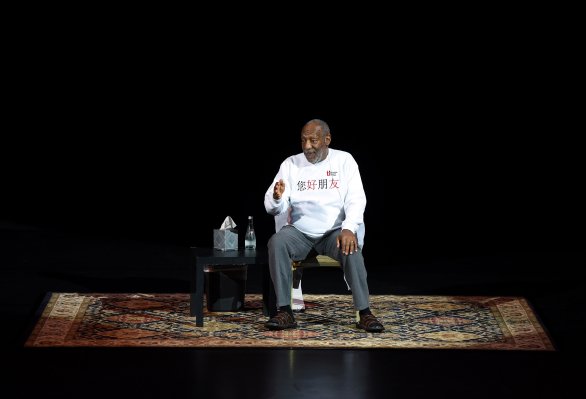