Beyoncé's New Song 'Ring Off' Isn't About Her Marriage After All

When it was announced, the title of Beyonce’s new song “Ring Off” was widely interpreted as a potential explanation of the ongoing rumors around her marriage to Jay Z. What the singer has produced instead is a moving tribute to her mother, Tina.

“Ring Off” is one of two new songs on the re-release of Beyoncé (both are streaming at Spin). That album’s middle-of-the-night release last year was almost as surprising as its complex, adult themes, dealing with themes of marriage and motherhood. Beyoncé was about, well, Beyoncé, within the context of her relationship. “Ring Off” expands the focus, addressing “Mama” in the first verse and telling her “I understand your many sleepless nights / When you sit and you think about Father / Or how you tried to be the perfect wife.”

Tina and Mathew Knowles, Beyoncé’s parents, separated in 2009 and are now divorced; Beyoncé has since severed professional ties with her father, who’s gone on to make provocative statements about his daughter’s personal life. But “Ring Off” isn’t about intra-family strife, despite the fact its very title references ending a marriage. It’s a celebration of Tina Knowles’s newfound independence, telling her to put her “love on top,” a witty reversal of Beyoncé’s own song of the same title. The song “Love on Top,” a fan favorite, is a celebration of prioritizing marital love; Beyoncé telling her mother “it’s your time to put your love on top” is an encouragement to put herself and her own happiness first.

Beyoncé’s first album, Dangerously in Love, concludes with “Daddy,” a saccharine tribute to Matthew Knowles that includes the lyric “I want my unborn son to be like my daddy / I want my husband to be like my daddy.” It’s a sign of the singer’s evolution in the eleven years since “Daddy” that she now ends the Beyoncé era with a tribute to her mother: “Always know that you’ve got a daughter / That’s so, so proud you took the high road,” she sings in “Ring Off.” What her father is or is not like doesn’t enter the equation, here; what’s most important is a woman’s own happiness and independence. It’s the musical equivalent of the message sent by the most memorable photo from Solange Knowles’s recent wedding, in which rows of staunch-looking woman stare down the camera. In the Knowles family, now, gender equality is paramount.

“7/11,” Beyoncé’s other new song, is less apt for analysis: It’s a ready-made club hit whose clear influences from Southern rap are more interesting than the lyrics. But with “Ring Off,” Beyoncé’s made a big step forward. Her album was about how fulfilling, if frustrating, it is to be in a long-term monogamous relationship. That album now features an examination of the circumstances under which it’s better to be alone, and an amplification of the album’s theme. The fulfillments of marriage, and of single life, both stem from putting herself first. 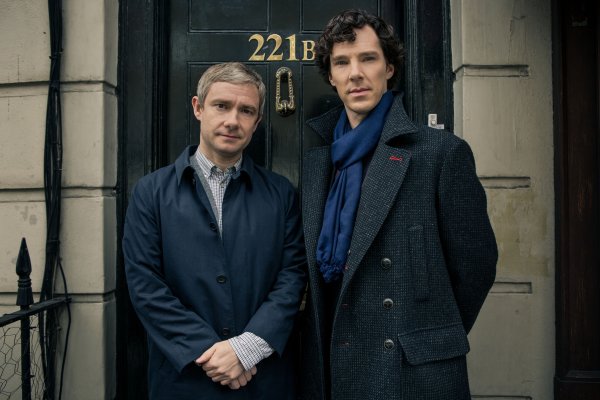 Sherlock Fans Warned to Expect 'Tragedy' in Season 4
Next Up: Editor's Pick