Is the Menstrual Cup Going Mainstream?

Not a whole lot seems to have changed in the menstrual market since the 1970s, when you no longer had to wear a belt to keep a pad in place.

But an innovation in period care—a collapsible menstrual cup called the Lily Cup Compact—was just successfully crowdfunded at more than 4,000% its goal on Kickstarter.com. The campaign, led by Swedish brand Intimina, which has five physicians on its board, aimed for $7,800. After the campaign ended Sunday, backers gave more than $325,000 to help make the Lily Cup Compact real.

Menstrual cups have existed in some form since the 1930s, though earlier iterations were nothing like the Keeper, Softcup and the Diva Cup, to name a few modern models. Still, American women have been slow to adopt them. “The very first time I heard about [menstrual cups] was a year and a half ago,” says Taraneh Shirazian, MD, assistant professor of obstetrics, gynecology and reproductive medicine at the Icahn School of Medicine at Mount Sinai in New York City. “When I talk to my patients about it, none of them are using it, and very few people know about it.”

Menstrual cups are flexible, goblet-shaped devices usually made of silicone or latex that are folded and then inserted like a tampon. Once inside, it opens up and forms a seal to stop menstrual blood from escaping from the uterus into the vagina. Other menstrual cups—the Keeper and the Diva Cup—are currently on the market, though they are not collapsible. The Lily Cup also comes with a carrying case, making it more convenient and discreet to tote around.

A 2011 survey found that 91% of women who tried a menstrual cup said they would switch to one—and recommend it to friends. The study also found that the cost of buying tampons for a year, approximately $37, was about equal to the price of a single menstrual cup, which can last for a decade. Menstrual cups come with other advantages. They can be left inside the body for 10 hours; tampons need to be changed every 8 hours to prevent the growth of the bacteria Staphylococcus aureus, a cause of toxic shock syndrome (TSS). According to a different 2011 study, women who used the Softcup saw no changes in their vaginal flora and no growth of that dangerous bacteria.

Still, the rate of menstrual cup use in the U.S. is still low, partly due to squeamishness and worries about their cleanliness. Menstrual cups need to be washed with soap and water after being removed. Because they don’t come from a package, though, fears of not getting the cup “clean enough” are one of the main reasons Shirazian’s patients don’t use it, she says. “I think there’s this misconception about sterility versus clean,” she says. “The vagina itself is not clean…things can be clean and be introduced and you’ll be fine. You won’t increase your risk of infections.”

The first menstrual cup with lasting power in the U.S. market, the Keeper, was introduced in 1987, and it’s no stranger to confronting the ick factor. “You can tell a woman about it and her first reaction’s going to be ‘Gross,’ or ‘Oh God, no way,’” says Elizabeth Moore, general manager of The Keeper Inc. “It had to come through the midwives and doulas and vegans.” But there’s evidence that the mindset is changing, particularly among young women. Most of the Keeper’s customers are 18-25 years old, Moore estimates. And they’re less shy about getting informed. “Ninety percent of the questions were done via email early on, and now we’re seeing more and more phone calls coming in,” she says. “That’s showing that women are more comfortable talking about it.”

“I think women are tired of having only two options,” says Intimina’s Amandine Pranlas-Descours. The Lily Cup Compact campaign closed with 8,530 backers. 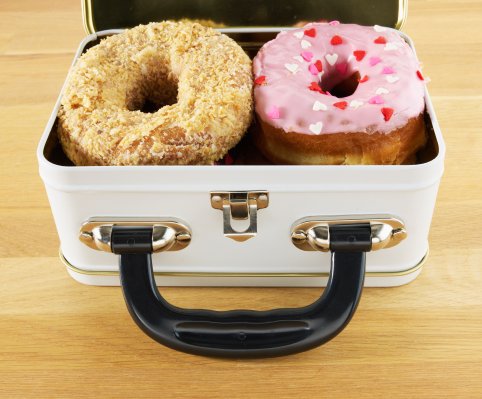 Lunch Brought From Home is Unhealthier Than Cafeteria Food
Next Up: Editor's Pick