After relentless, lake-effect snowfall blanketed much of western New York this week, officials warned on Thursday that a new peril is now looming — rain.

Erie County Executive Mark Poloncarz told a press conference on Thursday that forecasted rain over the weekend might put additional strain on already stressed roofs as the snow absorbs the precipitation.

Making matters worse, the National Weather Services warned early Friday that bouts of rainfall along with the arrival of warmer air could cause flooding over the weekend.

“Much warmer air will arrive over the weekend and into early next week along with rain showers at times … Potentially bringing a flood risk to areas which were buried by lake effect snow,” read a statement released by the agency.

Forecasts aside, authorities made steady progress and began clearing roads as snow continued to fall throughout Thursday. Buffalo Mayor Byron Brown boasted on his Facebook page that city workers had removed more than 24,000 tons of snow from the city’s south side as of Thursday evening. However, the mayor warned residents that pedestrian travel was still prohibited in South Buffalo.

During a press conference earlier in the day, New York Gov. Andrew Cuomo said state employees had cleared large swaths of highway clogged with several feet of snow but urged New Yorkers to refrain from driving in affected areas.

“Phase two of the storm is on its way and safety continues to be our top priority,” said the governor. “As snow removal efforts continue, we urge people to stay inside and off the roads so that we can get people back to their everyday routines as quickly as possible.”

After weathering three days of record snowfalls, homebound Buffalo residents also coped with back-to-back announcements that neither of the city’s beloved sports franchises would be able to host scheduled home games this weekend.

The NHL announced that Friday’s game between the Buffalo Sabres and New York Rangers had been postponed indefinitely. Then the NFL said that the Bills home game against the New York Jets on Sunday will now take place more than 200 miles west in Detroit on Monday night.

Most Popular on TIME
1
Everything You Need to Know About Nurse Ratched Before Watching the New Netflix Show
2
Supreme Court Justices Respond to Ruth Bader Ginsburg's Death
3
Review: The Emmys Were a Comforting Dose of Normalcy 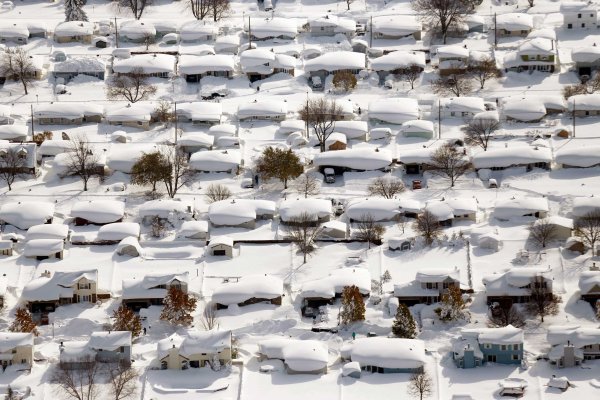