A Pokot woman holds a razor blade after performing a circumcision on four girls in a village about 80 kilometres from the town of Marigat in Baringo County, Kenya, Oct. 16, 2014.
Siegfried Modola—Reuters
By Charlotte Alter

When it comes to stopping violence against women, actions speak louder than words. So even though there’s increased worldwide awareness about violence against women, the problem won’t be solved unless countries make significant policy and financial changes to support victims, according to a five-part series of studies in The Lancet, one of the world’s premier medical journals.

The series, entitled “Violence Against Women and Girls,” calls the violence a “global public health and clinical problem of epidemic proportions,” and the statistics are bleak. 100-140 million women have undergone female genital mutilation worldwide, and 3 million African girls per year are at risk. 7% of women will be sexually assaulted by someone besides their partner in their lifetimes. Almost 70 million girls worldwide have been married before they turned 18. According to WHO estimates, 30% of women worldwide have experienced partner violence. The researchers said that these problems could only be solved with political action and increased funding, since the violence has continued “despite increased global attention,” implying awareness is not enough.

“No magic wand will eliminate violence against women and girls,” series co-lead Charlotte Watts, founding Director of the Gender Violence and Health Centre at the London School of Hygiene & Tropical Medicine, said in a statement. “But evidence tells us that changes in attitudes and behavior are possible, and can be achieved within less than a generation.”

One of the major problems highlighted in the Lancet series is that much of the current research on violence against women has been conducted in high-income countries, and it’s mostly been focused on response instead of prevention. The study found that the key driver of violence in most middle-and-low income countries is gender inequality, and that it would be near impossible to prevent abuse without addressing the underlying political, economic, and educational marginalization of women.

The study also found that health workers are often uniquely positioned to help victims, since they’re often the first to know about the abuse.

“Health-care providers are often the first point of contact for women and girls experiencing violence,” says another series co-lead, Dr. Claudia Garcia-Moreno, a physician at the WHO, in a statement. “The health community is missing important opportunities to integrate violence programming meaningfully into public health initiatives on HIV/AIDS, adolescent health, maternal health, and mental health.”

The series makes five concrete recommendations to curb the violence against women. The authors urge nations to allocate resources to prioritize protecting victims, change structures and policies that discriminate against women, promote support for survivors, strengthen health and education sectors to prevent and respond to violence, and invest in more research into ways to address the problem. In other words: money, education, and political action are key to protecting the world’s most vulnerable women. Hashtag activism, celebrity songs, and stern PSAs are helpful, but this problem is too complicated to be solved by awareness alone.

“We now have some promising findings to show what works to prevent violence,” said Dr. Cathy Zimmerman from the London School of Hygiene & Tropical Medicine. “We urgently need to turn this evidence into genuine action so that women and girls can live violence-free lives.”

The study comes just in time for the UN’s International Day for the Elimination of Violence Against Women, on Nov. 25. 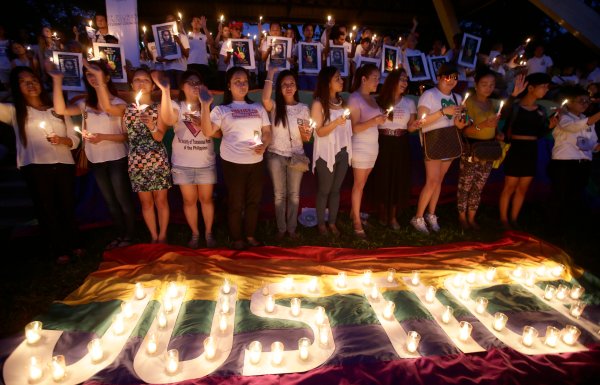