Studies show that there are a lot of things you can do to preserve your intellect—stay social and interact with as many friends and family as you can, learn new things (especially languages), go to new places and stay physically active. If there’s any time left over, consider getting a more engaging career. There’s now evidence that what you do to make a living can also help to preserve your brain power.

Reporting in the journal Neurology, scientists at the University of Edinburgh found that the more complex a person’s job is, the more likely they are to score higher on memory tests and general cognitive skills when they reach age 70.

The team recruited about 1,000 69-year-olds who were part of the Lothian Birth Cohort, a database that included people born in the Scottish town in 1936. At age 11, the participants had taken IQ tests so the researchers could compare those scores to cognitive tests given to them at age 70.

In the study, researchers assessed their occupations by their complexity, based on how much interaction with people, data or things the job required. Complex “people” jobs, for example, include lawyer, social worker, surgeon or probation officer, compared to less socially complex jobs like factory worker, or painter. Complex “data” occupations include architect, graphic designer and musician, while less complex data jobs include construction worker, cafeteria worker or telephone operator. Finally, people working in more intricate ways with “things” would include machine workers and those who make instruments, while bank managers and surveyors might rank as having simpler interactions with things.

When the scientists compared occupations with cognitive tests at age 70, they found that people with more complex people and data jobs scored higher on memory, speed and general thinking skills than those with less involved jobs in these areas. People with more complex data-related jobs also scored much better on processing and speed skills.

But when the researchers factored in the effect of the participants’ IQ at age 11—in other words, their starting intellect—they found that the influence of the jobs remained, though it shrunk a bit. “People who have higher cognitive ability to begin with are those more likely to have more complex jobs,” says Alan Gow, assistant professor of psychology at University of Edinburgh and Heriot-Watt University and one of the study’s co-authors. “Once we account for that, the association between more complex jobs and better cognitive outcomes is reduced, but there remains a small additional benefit for our cognitive abilities from being in more complex jobs.”

In fact, he says, the strongest predictor of cognitive abilities at age 70 is intellect earlier in life. So the IQ of the participants at age 11 accounted for about 50% of the variance in test scores when they reached 70. Jobs can add to that effect. The stronger the cognitive starting point, the more brain reserve people might have as the normal processes of aging start erode some nerve connections involved in higher order thinking. Having a complex job that requires constant activation of these neural networks, and formation of new connections, can also contribute to building this reserve capacity.

Gow admits, however, that the study did not take into account how long people stuck with the jobs, so there may yet be a stronger effect of occupation on later life intellect the longer people stay with a complex job. Given the results, he and his team are eagerly following the 70-year olds to see if occupation and other factors can influence their cognitive functions. Now, they’re studying brain images of the volunteers to find changes in volume in certain thinking areas of the brain, as well as connections in the nerve network that’s responsible for higher order skills like processing, memory and reasoning. 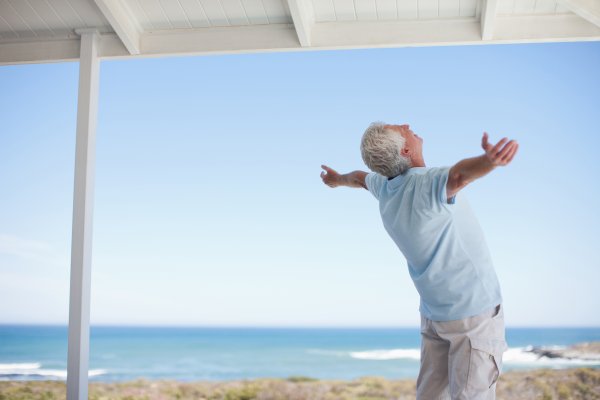 Here's Where Old People Are Happy
Next Up: Editor's Pick