Looking for a Ride? Here's a List of Uber Alternatives

A Lyft car operates in San Francisco.
courtesy of Lyft
By Katy Steinmetz

Uber has lost some users this week following stories about executives proposing opposition research on critical journalists’ personal lives and tracking a journalist’s use of the service without her permission. Some customers publicly ended their relationship with the company via social media, including humorist-actor-author John Hodgman. “I really don’t want to take that crummy car I was so glad to hang up on two years ago,” he wrote in a post about his decision to delete the app. “But I just can’t get into a car with those guys anymore.”

If you live in certain parts of the world, you might not even have Uber available as an option to walk away from. And you may have no intention of quitting Uber at all, continuing to love the service that is leading the revolution of local transportation around the world, providing an on-demand alternative to calling up a old-fashioned taxi cab dispatcher.

But for those out there into trying new things, here are some of the other players on the road offering smartphone-enabled rides from A to B:

Lyft: The San-Francisco based ridesharing company is the friendly neighbor to Uber’s cool chauffeur. Drivers use their personal cars, grilles adorned with signature pink mustaches, and invite users to sit in the front seat, often offering a fist bump as a greeting. The company has rolled out three additional services, Lyft Plus (fancy SUV version), Lyft Line (carpooling version) and Lyft for Work (commuting version). Lyft operates in about 60 U.S. cities, compared to Uber’s 220 worldwide. In some cities, like New York, Lyft functions very similarly to Uber.

Sidecar: This ridesharing company, also based in the Bay Area, promises the “lowest prices on the road.” Available in 10 major U.S. cities, Sidecar aims to match riders with “everyday people” driving their personal cars. But unlike other services that rack up a fare as you go, Sidecar asks riders to enter their destination and offers a selection of pre-set prices, along with ETAs, which the rider can choose from. The company also offers a cheaper “Shared Rides” carpooling option like Lyft Line and Uber Pool.

Flywheel: Taxi companies are using apps like Flywheel to re-disrupt the disruptors. Currently in San Francisco, L.A. and Seattle, Flywheel allows users to order a taxi on-demand and have payments made automatically through the app. The ride likely won’t be as fancy as an Uber black car or as cheap as an UberX, but there’s no surge pricing and the company is brokering deals to allow scheduled rides to airports, places where ridesharing companies are typically non grata.

Curb: In August, Taxi Magic launched as the rebranded Curb, broadening their focus beyond providing licensed taxis on-demand to include fancier cars-for-hire (like Uber black cars) in some of the 60 markets where Taxi Magic was already working with fleets. Unlike most of the other app-based services, customers have the option of paying with cash rather than through the app. The refreshed company is also working on launching pre-scheduled rides, to the airport and beyond.

Hailo: Another e-hail company that works with licensed cabs, Hailo is focused on the European market, having launched in London in 2011. (betrayed by their slogan, “the black cab app.”) In October, the company announced it would be closing operations in U.S. cities like New York, Chicago and Boston, shifting their eye to growth in Asia and, perhaps, re-entering the U.S. market in a few years. In September, the company launched an innovative feature that allows users to pay for the bill in a street-hailed taxi through the app.

Summon: The rebranded and overhauled InstaCab, Summon is an on-demand service that has a hybrid approach, offering both taxi e-hails and cheaper peer-to-peer “personal rides” with a no-surge-price promise. Summon is currently available only in the Bay Area, but the company said earlier this year they plan to expand to L.A., Boston and New York. The startup offers pre-scheduled rides through their Summon Ahead program, including fixed-rate rides to surrounding airports, with a journey to San Francisco’s SFO costing a mere $35.

RubyRide: Based in Phoenix, Ariz., and founded in 2013, RubyRide is a fledgling subscription-based startup that bills itself less as a taxi replacement and more as a replacement for owning a car. A basic plan that allows unlimited pre-scheduled pickups and drop-offs within certain “zones” like Downtown Phoenix costs $299 per month. The company offers limited on-demand service but plans to expand their options—including replacing rides to and from the dry cleaners, say, with delivering members’ dry cleaning—as they grow.

Shuddle: Dubbed “Uber for kids,” this San Francisco startup positions itself as an app for lightening Mom’s load. Parents can pre-book rides to take kids (who aren’t old enough to drive themselves) to sports practice or school. With safety the obvious concern, the company institutes layers of checks beyond thoroughly screening employees: drivers are given passwords they have to use before picking up kids; parents are given photos of the drivers and cars and can monitor the trip through their app. Drivers must have their own kids or have worked with kids. The company’s first 100 drivers, which they call “caregivers,” are all female. 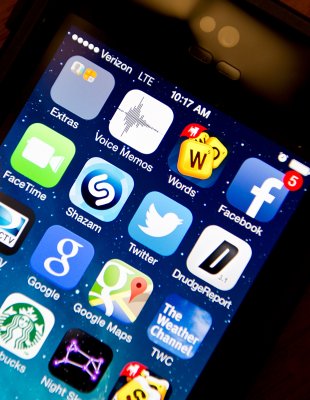 How One Word Made a Massive Change to Apple's App Store
Next Up: Editor's Pick