One of the oldest cities in the world is yet again the focal point of the Israeli-Palestinian conflict, with more bloodshed in Jerusalem on Tuesday when three Israelis and two Palestinian attackers were killed in near-simultaneous attacks.

Prime Minister Benjamin Netanyahu called an emergency meeting of his Security Cabinet on Tuesday to discuss plans to halt the violence. “Israel will come to settle accounts with the murderers, those who try to murder, and anyone who helps them,” he said. “Not only will we take away rights, but they will pay the full price.”

The current round of tensions began on the eve of the Jewish New Year a month ago, when Israeli police clashed with Palestinian protestors at the city’s most hotly contested religious site, known to Muslims as Haram al-Sharif (Noble Sanctuary) and to Jews as the Temple Mount. The compound houses the al-Aqsa Mosque and the Dome of the Rock, and is buttressed by the Jewish holy site, the Western Wall.

Since the September riots began, at least eight Israelis have been killed in various attacks. Twenty-eight Palestinians (12 of whom were identified by Israel as attackers) have died and hundreds have been injured in clashes with Israeli troops. Officials have said they are considering closing off Arab suburbs in east Jerusalem, and making it easier for Israelis to buy firearms by relaxing gun-licensing requirements, Associated Press reports.

Earlier this year, a leaked E.U. analysis of the growing violence and polarization in Jerusalem found that the ancient city had reached a dangerous boiling point. In 2014, 2,069 Palestinians and 168 Israelis were injured in clashes in Jerusalem, five times more than in either of the two previous years. In Jerusalem in 2014, 19 people were killed in incidents related to the Israeli-Palestinian conflict, compared to one death in 2012 and 2013.

Here are some pointers to understanding the struggle between some of the Israeli and Palestinian residents living in Jerusalem.

1. Jerusalem is sacred to the followers of three major faiths

Despite covering only 0.35 square miles the walled Old City in Jerusalem has an exceptionally high concentration of holy sites and monuments and is sacred to the world’s Jews, Muslims and Christians.

For Christians, who number about 14,000 — or 2% — of Jerusalem’s population, the city is the site of the crucifixion and resurrection of Jesus. The Church of the Holy Sepulcher and the Garden Tomb, both purported sites of Jesus’s resurrection, attract worshippers from around the world.

For Jews, who comprise 62% of the population, Jerusalem is the holiest city in the world. It is the capital of the ancient Israelite kingdom and the former location of the Jewish temples.

For Muslims, who make up more than a third of Jerusalem’s population, the city is one of Islam’s holiest sites, after Mecca and Medina. Muslims believe that the Prophet Muhammad was transported from Mecca to Jerusalem during his Night Journey to heaven.

2. The demand for equal access to the holy shrines is a source of tension

Non-Muslims are not permitted to pray on the Temple Mount as part of a long-held tradition, which has been upheld even after the 1967 takeover of East Jerusalem by Israel. Non-Muslims are allowed to visit in between Muslim prayer times but are not allowed to pray, but the ban is sometimes violated, particularly around major Jewish holidays. Muslims see these visits as provocative.

The recent violence has been partly triggered by belief of some Palestinians that Israel is preparing to allow Jews to pray on the site — something right-wing Jewish nationalists have been calling for. Though the Israeli government has emphatically denied plans for this and said the status quo will remain, deep distrust among Palestinians regarding Israeli intentions has led many to see this as further encroachment of Israeli presence onto what is currently a Muslim-managed site. U.S. State Department spokesman John Kirby said Monday that “it is absolutely critical that all sides exercise restraint, refrain from provocative actions and rhetoric and preserve unchanged the historic status quo on the Haram al-Sharif/Temple Mount.”

3. Jerusalem has a history of being divided and was split into two for nearly twenty years

In the last hundred years alone, the city has been controlled by the Ottoman Empire, Great Britain, jointly by Jordan and Israel and since 1967, wholly by Israel.

In 1947, the United Nations General Assembly voted to partition Palestine into Jewish and Arab states, with an autonomous Jerusalem under international supervision.

In 1948, the British departed and the state of Israel was proclaimed. For nearly two decades, barbed wire, concrete barriers and land mines divided the city. Many Palestinians fled areas of West Jerusalem under Israeli control while Jews fled the areas of East Jerusalem under Jordanian control.

In 1980, the Knesset (Israel’s Parliament) claimed a reunited Jerusalem as its undivided capital. The international community, including the U.S., does not recognize this and maintains embassies in Tel Aviv.

4. The city’s growth and movement of people have presented new challenges

For hundreds of years Jerusalem was a crowded and impoverished walled city. Now it is a sprawling metropolis with over 800,000 inhabitants with the Old City at its center. War still shapes the geography of Jerusalem. The community dividing lines mostly follow the ceasefire lines that divided the Jordanian and Israeli armies from 1948 to 1967.

5. In times of relative peace, Palestinians and Israelis cross between areas easily

Some Israelis take advantage of cheaper shopping in the East and cheaper services such as car repair. Palestinians study at the Hebrew University and work in the service sector in the West. Although there is a Palestinian hospital, major surgery for both groups takes place at the main Israeli hospitals.

Affluent Palestinians can be seen in the bars and restaurants of West Jerusalem, rarely standing out among the many other international residents of Jerusalem. Liberal Israelis like to visit East Jerusalem establishments such as the Jerusalem Hotel and the fabled American Colony Hotel. Many Israelis have a favourite Palestinian-owned hummus restaurant in the Old City.

The government of Israel reserves the right to withdraw residency rights from Palestinians if the center of their life is not deemed to be in Jerusalem. Israeli residents of Jerusalem are free to live wherever they want in Israel or abroad without fear of losing their citizenship.

Palestinians are not normally allowed to use Israel’s main Ben Gurion Airport. To leave the country they must travel to the Allenby Bridge crossing to Jordan. There they must leave their identity cards and pick them up when they return. 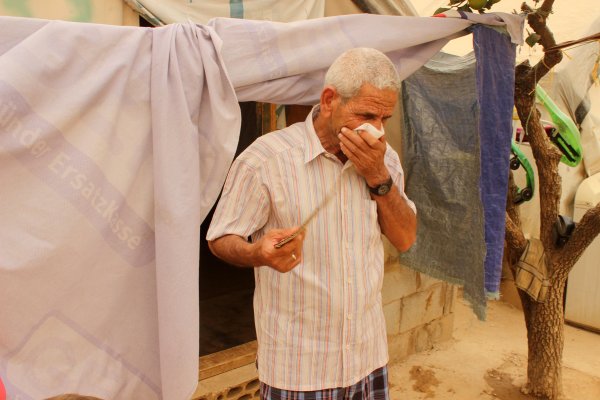 Why Some Arabs States Refuse to Accept Syrian Refugees
Next Up: Editor's Pick