Yet when Macy’s held its first parade 90 years ago, the animals borrowed from the Central Park Zoo were hardly a handful. It was instead the balloons, in ensuing years, that would terrorize New York City.

The department store debuted its annual parade on Thanksgiving Day in 1924, when store employees dressed as clowns, knights and cowboys marched along with elephants and horse-drawn floats in what was then called the Macy’s Christmas Parade. Then, like now, it kicked off the season of Christmas shopping that begins with Black Friday. But as the event has evolved over the years, new challenges have arisen — and sometimes popped.

Giant balloons joined the parade in 1927, starting with Felix the Cat. But Felix had no way to be deflated. When the parade ended, he was simply released into the sky, where he burst. The next year, designers added a release valve to the balloons that, they hoped, would slowly leak helium while the animals drifted harmlessly out to pasture. According to TIME, “Macy’s claimed that they would float hundreds of miles away from New York before landing softly in fields or people’s yards.” The balloons came with a return address and an incentive: whoever found one could return it to Macy’s for a $100 reward.

The plan was not seamlessly executed, however. Of five balloons released after the 1928 parade, three (a tiger, a bird and an elephant) landed in Long Island, where one prompted a jealous squabble for the reward. According to the New York Times, neighbors and passing motorists who had seen the tiger balloon land rushed to grab it: “[A] tug of war ensued… The rubberized silk skin burst into dozens of fragments.”

A fourth balloon, shaped like a hummingbird, landed in the East River and split into two pieces. The fifth, a ghost, was still afloat when the Times story was published on Dec. 1; it had last been seen “moving out to sea over the Rockaways with a flock of gulls in pursuit.”

Despite the snags, Macy’s continued to send the balloons skyward after the parades until one wrapped itself around an airplane’s wing in 1932, sending the plane into a tailspin.

Balloon mishaps, including some that caused serious injuries, have remained a problem for the parade, especially in windy years, such as:

After the 1997 balloon crash, which fractured a woman’s skull and put her in a coma for nearly a month, Macy’s agreed to abide by new rules on the size of balloons and the wind speeds in which they could operate. For the 3.5 million people who line up along the parade route every Thanksgiving, it’s relatively low-risk entertainment — although still not quite as safe as it is for the 50 million people who watch from their living rooms, out of balloon’s reach. 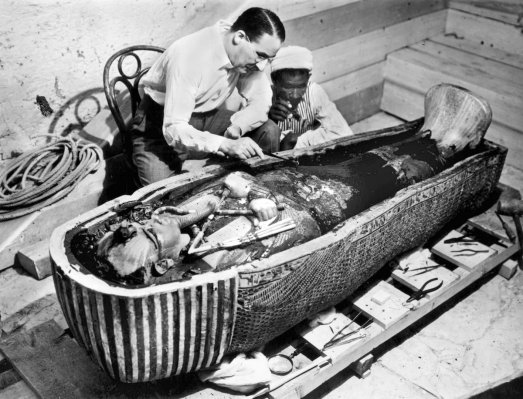 The Origins of the 'Pharaoh's Curse' Legend
Next Up: Editor's Pick