Ferguson Is the Wrong Tragedy to Wake America Up

For many, the main lesson of the Ferguson verdict is that Michael Brown would still be alive if he were white — that Darren Wilson’s gunshots were the spawn of the racism always just beneath the surface of the white American soul.

However, in light of what we heard last night, I feel that the Ferguson incident is instructive to America in a larger sense. The key element in the Brown-Wilson encounter was not any specific action either man took — it was the preset hostility to the cops that Brown apparently harbored. And that hostility was key because it was indeed totally justified.

The right-wing take on Brown, that he was simply a “thug,” is a know-nothing position. The question we must ask is: What is the situation that makes two young black men comfortable dismissing a police officer’s request to step aside?

These men were expressing a community-wide sense that the official keepers of order are morally bankrupt. What America owes communities like Ferguson — and black America in general — is a sincere grappling with that take on law enforcement that is so endemic in black communities nationwide. As Northwestern philosopher Charles Mills has put it, “Black citizens are still differentially vulnerable to police violence, thereby illustrating their second class citizenship.”

This is true. It is most of what makes so many black people of all classes sense racism as a key element of black life, and even identity. Now, some suppose that the reason for what Mills refers to is black people’s fault, that black people are just too dumb, lazy, and immoral to understand what it is to be decent citizens. Most would disagree, however, which logically implies that something has gone terribly wrong from the other end — from law enforcement itself. The President’s statement on the verdict got at this point: what we must get past is larger than the specifics of what happened between Wilson and Brown.

And in that vein, as someone who has written in ardent sympathy with the Ferguson protests, I find this hard to write, but I have decided that it would be dishonest of me to hold back. As I have written endlessly, America will never get past race without a profound change in how police forces relate to black men. However, I’m not sure that what happened to Michael Brown — and the indictment that did not happen to Officer Darren Wilson — is going to be useful as a rallying cry about police brutality and racism in America.

Based on the evidence known to us now, a common take will be that the incident proceeded thusly: Brown stole from a convenience store, Wilson tried to stop him based on his description. Brown refused to stop and physically assaulted Wilson in his car, Wilson shot Brown in self-defense. Brown ran about 150 ft. from the car. He then ran 25 ft. back toward Wilson, likely trying to indicate surrender. Wilson thought Brown was trying to reinitiate the assault and fired further, which killed Brown. This was a hideous misunderstanding. And yes, if the guy lurching back toward Wilson had been white, just maybe he wouldn’t have fired those last shots.

But can we really know that surely enough to enlighten a nation? We are told that this tragic sequence of actions shows that America “devalues black bodies,” as a common phrasing has it. But I fear the facts on this specific incident are too knotted to coax a critical mass of America into seeing a civil rights icon in Brown and an institutionally racist devil in Wilson.

I was among the many who hoped Trayvon Martin’s death would make the key difference many now hope Ferguson will, and got plenty of hate mail for being too “hasty” in judging George Zimmerman. Black bodies are indeed devalued. Race does play a role in whether or not a black man gets killed by a cop (or someone like Zimmerman pretending to be one).

However, Wilson apparently didn’t single Brown out because of his black body, but because that black body had just nabbed goods from a store and also assaulted its owner. It is also clear that Brown defied an officer’s reasonable request, and then battled with him. We may never know whether Brown reached into the car or whether Wilson grabbed Brown by the neck. But we do know that Wilson fired the lethal final shots upon Brown coming back toward him. Firing these shots was indeed impulsive; and one wishes someone who could fire in such a moment never had been trusted with a gun. But Wilson did not, as some have claimed, shoot Brown in the back as he ran away.

“But he didn’t deserve to die!” many stand at the ready to assert. And of course he didn’t. But we must consider the contrast with, say, Amadou Diallo killed in a lobby for pulling out a wallet. Or Martin killed for resisting a baseless detainment by a self-declared neighborhood patrolman. Or John Crawford killed in Ohio for examining a BB gun at a Walmart.

The Ferguson episode, in this company, stands out. It requires, as a rallying point, a degree of elision, adjustment. It will require turning away from Brown’s criminal act just before the incident, and his conduct toward a police officer a few moments later, based on the tricky proposition that these things must have no bearing whatsoever upon how we evaluate the succeeding sequence of events. The now iconic gesture, the hands up in “Don’t shoot” surrender, will become sacrosanct regardless of the evidence as to whether Brown actually held his hands up in that way. Icon, sacrosanct — there is an aspect of the ritual here.

But ritual dazzles more than it convinces. Beyond the converted, the less committed observer will see the facts piling up and conclude that one can be fully aware of racism’s persistence and yet still feel that the part racism played in Brown’s death is too abstract to qualify as a Selma-style — or even Trayvon-style — teaching moment. We need here Selma, Sanford — we want to make all of America put down their beers and feel this turning point. Again, of course Brown didn’t deserve to die — at all. But we have an urgent and challenging task here. And if so — and, God, it’s very much so — aren’t other deaths that have grieved us more useful in teaching a vast nation of people, with various levels of understanding and concern, that we have a serious problem here?

What happened to Diallo, Martin, Crawford, and also Oscar Grant is a clearer demonstration of what faces us than what happened in Ferguson. People don’t like being told to ignore facts; even fewer find ambiguity a spark for indignation. Crawford’s killers weren’t indicted either. We must wonder why this is considered a less urgent — and instructive — catastrophe than what happened in Ferguson. I mourn Brown as we all do, but I worry that we have chosen the wrong tragedy to wake this country up.

Read next: What History Books Should Say About Ferguson 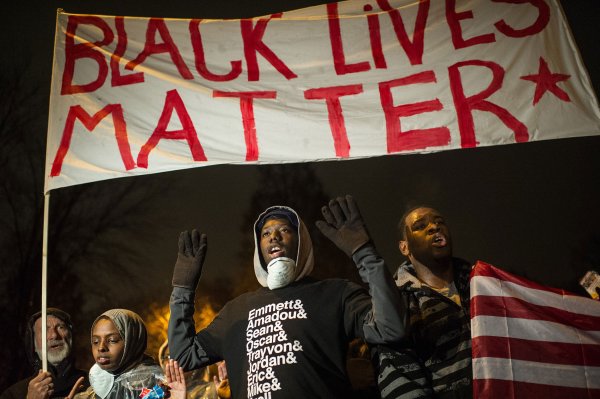 Ferguson Decision Shows the Brutality of Racism
Next Up: Editor's Pick