View of the Apple watch displayed in a shop on September 30, 2014.
Loic Venance—AFP/Getty Images
By Jack Linshi

Apple opened the floodgates for Apple Watch developers Tuesday when it made the smartwatch’s Software Development Kit available for the first time. But the SDK isn’t just for coders — it also has lots of hints about what using the Apple Watch will be like for consumers when it hits store shelves sometime next year.

Here are some new discoveries about the Apple Watch:

The iPhone is pretty much a requirement if you want to use what will be the Apple Watch’s most advanced apps. In Apple’s own words, “a Watch app complements your iOS app; it does not replace it.” Apple Watch apps will essentially run on your iPhone, and the smartwatch will be an extension of your smartphone.

We already knew the Apple Watch’s two sizes (just their heights, not widths). But now we know their display resolutions, too. The 38mm watch is 272×340 pixels, while the 42mm watch is 312×390 pixels. Apple says those are good enough resolutions to be labeled as Retina displays, which Apple has said is a feature of the watch.

Still, it’s unclear exactly how sharp the displays will be. Some estimates have put the Apple Watch screen clarity on the level of the iPhone 5, which has a more hi-res display than iPads and MacBook Pros. If that’s the case, the Apple Watch could boast a better display than the current smartwatch market leader, Samsung Gear S.

The Apple Watch could come in more sizes

The way Apple has set up the Apple Watch’s interface is more like a website than a smartphone, which should make it easier for developers to adapt their apps to work on larger or smaller watches sometime down the road. While our wrists are only so wide, it wouldn’t be a stretch to say Apple is considering new ways to build all sorts of screens.

The new font, called San Francisco, was “designed specifically for legibility on Apple Watch,” according to Apple’s developers’ site. The sans serif font looks a bit like Arial and is meant to take up less horizontal space.

There are two types of notifications

Apple gave users a preview of how notifications work during the Apple Watch unveiling, but we know a bit more now. There are two types of “looks:” the Short Look, which briefly provides a “discreet, minimal amount of information” when you raise your wrist, and the Long Look, which gives you more info if you tap on a Short Look notification or keep your wrist held up. 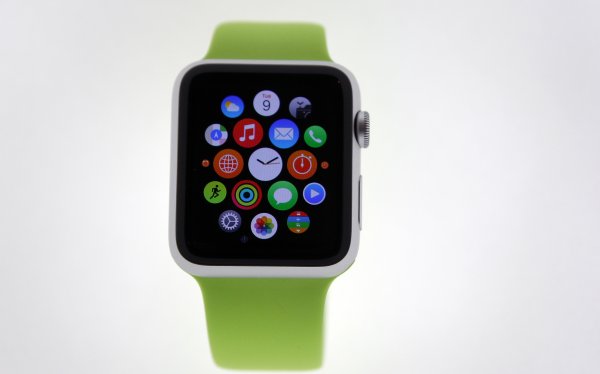 Apple Just Shot the Starting Gun on the Smartwatch Wars
Next Up: Editor's Pick