Russian President Vladimir Putin attends a meeting with members of the All-Russia Popular Front in Moscow on Nov. 18, 2014
Alexei Druzhinin—AP
By David Stout

A top adviser to Russian President Vladimir Putin said Tuesday that the Kremlin wants “a 100% guarantee” that Ukraine will be prevented from joining NATO.

Dmitri Peskov told the BBC that NATO’s eastward expansion continued to make Russia “nervous.” His comments echoed similar tough talk coming from President Putin, who promised a crowd attending a forum in Moscow on Tuesday that Russia would never be subdued by Washington.

“Throughout history no one has ever managed to do so toward Russia — and no one ever will,” RT quoted Putin as saying.

“We see the movement of troops, of equipment, of tanks, of artillery, of advance air-defense systems, and this is in violation of the cease-fire agreements,” said Stoltenberg, after arriving at the European Union headquarters in Brussels. “We call on Russia to pull back its forces from eastern Ukraine and to respect the Minsk Agreements.”

The alliance, along with independent monitors, has issued numerous reports during the past two weeks claiming that the Russian military is moving armored columns across the border into Ukraine, where rebel militias have been shelling strategic locations in the war-torn Donbass region on a daily basis.

In Moscow on Tuesday, Germany’s Foreign Minister Frank-Walter Steinmeier warned during a press conference that there was no end in sight to the conflict in Ukraine unless all parties to the Minsk accord stuck to the cease-fire.

“There are no grounds for optimism in the current situation,” Steinmeier told reporters, according to Agence France-Presse.

In Washington, U.S. Secretary of Defense Chuck Hagel struck an even harsher tone — labeling Russia’s incursions into Ukraine as “dangerous and irresponsible.”

“The violations of sovereignty and international law that the Russians have perpetuated continue to require responses,” said Hagel, adding that the U.S. has begun working with NATO “in shifting our entire rotational rapid deployment focus.”

But as politicians verbally spar over Russia’s actions in Ukraine, the humanitarian disaster inside the country continues unabated. Last week, the U.N.’s refugee agency, UNHCR, warned that Europe was facing its largest displacement crisis in more than two decades as winter arrives.

“By October, UNHCR estimated that more than 800,000 people have been displaced, representing the largest displacement of people in Europe since the Balkan wars,” read a statement released by the U.N. “It is the latest refugee crisis in a year that has seen several, and is stretching resources thin.”

Read next: Putin’s Loss of German Trust Seals the West’s Isolation of Russia 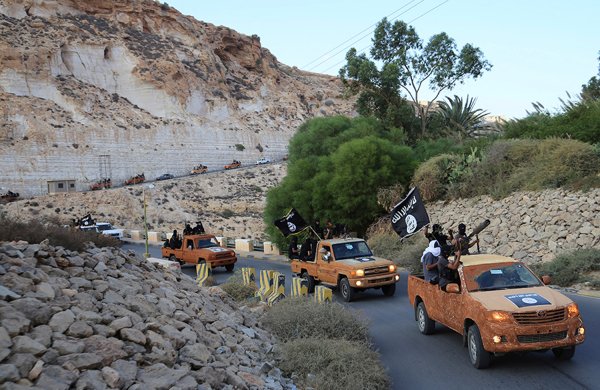 ISIS Seizes Libyan City and Aims to Expand West
Next Up: Editor's Pick