The dolls kids are used to playing with are often nipped and tucked to have impossibly big eyes and a ridiculously small waist. So when Nickolay Lamm presented a Pennsylvania class of second graders with his Barbie alternative, his newly created Lammily doll which has the measurements of an average 19-year-old woman (according to CDC data) rather than an anatomically impossible mutant, he didn’t know how they were going to react.

Most of the kids thought the doll, available for purchase Wednesday, looked kind of familiar.

“She looks like a regular girl going to school.”

“She looks like she would help someone if they were hurt.”

That reality check didn’t prove to be a bad thing. When presented with a blonde and busty Barbie, the children said that they’d rather have the one who, if real, “would be able to stand.” A very apt observations, considering previous research showing Barbie wouldn’t be able to lift her head fully if she were an actual human.

Of course unrealistic looking dolls are still very popular whether it’s Barbie or the Monster High collection with their mini-skirts and platform-heeled thigh-high boots. In 2012, researchers asked 60 girls, ages six to nine, to choose one of two paper dolls: one dressed in a tight “sexy” outfit and the other wearing a “fashionable” but loose and covered up outfit. Sixty-eight percent of the girls wanted to look like the sexy doll and 72% thought she would be “more popular” than the conservative looking paper doll. That study had a limited sample size, and paper dolls are no match for 3D toys, but the results are an indication of how difficult it is to change cultural trends.

But perhaps after a decade during which dolls have gotten ever more racy, perhaps parents and kids are ready for an appealing alternative to the bug-eyed, wasp-waisted creatures that now populate the girls aisle. At least that’s what Lamm is betting on.

Read more about the Lammily doll — and her strange accessory packs — here.

Read next: Mattel Apologizes for Making Barbie Look Incompetent in Barbie: I Can Be a Computer Engineer 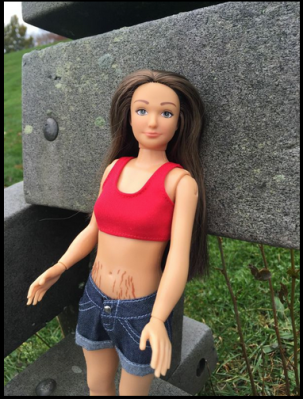 The New 'Normal Barbie' Comes With an Average Woman's Proportions — and Cellulite-Sticker Accessories
Next Up: Editor's Pick