Senate Democrats blocked a bill to authorize the 1,179-mile TransCanada Keystone XL pipeline Tuesday evening, delaying a confrontation between the White House and Republicans over the project and potentially damaging Democratic Louisiana Senator Mary Landrieu’s hopes for re-election in a tight runoff vote next month.

All 45 Republican Senators and 14 Democrats voted for the bill, falling one short of the 60 votes needed to override a Democratic filibuster of the measure.

The vote capped a day of political stunts and speeches on the floor of the Senate. Hours earlier, Chairman of the Environment and Public Works Committee, California Democrat Sen. Barbara Boxer, stood in front of a huge poster marked “Misery Follows Tar Sands” and another with people wearing protective face masks. “It’s called Keystone XL,” Boxer said, “Not extra large, but extra lethal… Why do we want to bring barrels of filthy, dangerous, dirty pollution into America?”

On the other side of the Capitol, House Speaker John Boehner said in a press conference Tuesday morning that vetoing a bill for the popular pipeline would be the “equivalent of calling the American people ‘stupid.’”

Landrieu worked hard to find the 15 Democrats needed for passage, garnering support from Colorado Sen. Michael Bennet and Delaware Sen. Tom Carper. “We’ve been at this for six years,” said Carper who believes the pipeline has “impeded” efforts to pass clean energy bills. “We need to vote on it and move on.”

Even some environmentalists agree with Carper’s assessment that the Keystone push has taken the spotlight from other issues. Michael Shellenberger, the President of the progressive Breakthrough Institute, says that the Keystone debate is symbolic of a broader problem for the environmental movement in which partisans with narrow interests fail to support potentially bipartisan energy plans with coal alternatives like nuclear and natural gas. “I think the greatest irony of it—and that no one really talks about—is that right in the middle of the thing we’re having a huge fracking boom,” he says.

“[Environmentalists] hitched their carts to the Democrats and it doesn’t really give any incentive to Republicans to care or do much of anything on the environment,” adds Shellenberger. “This is the most politically weakened environmental movement there’s probably ever been since the movement was created in 1970.”

As for Landrieu, her chances to defeat Rep. Bill Cassidy in their Dec. 6 runoff–never very good–just got smaller. Even the publicity she got pushing the bill won’t do her much good, according to Louisiana political experts. “I don’t think the pipeline bill push will do much to change the dynamics of this election,” Pearson Cross, a political science professor at the University of Louisiana at Lafayette said before the vote. “It is probably too little too late.”

After the bill’s defeat was announced on the floor, a singing man dressed in Native American garb and a handful of student protesters were escorted from the viewing section of the Senate chamber and handcuffed. 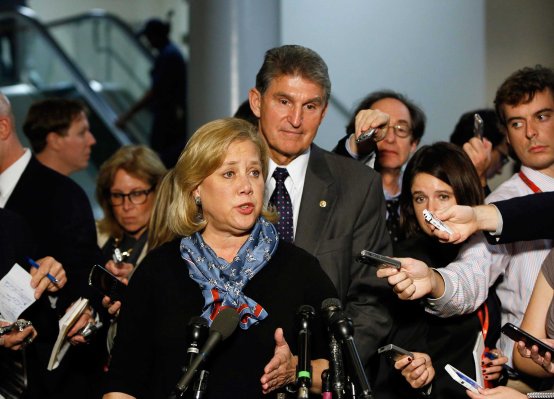 It's Keystone or Bust for Landrieu
Next Up: Editor's Pick