How to Survive a Spaceship Disaster

Falling from ten miles up, with no spacesuit on, in air that’s 70 degrees below zero and so thin you can hardly draw breath…Conditions were not ideal for Peter Siebold, a test pilot flying on Virgin Galactic’s SpaceShip Two, to survive. But he did. Siebold told investigators that he was thrown from the plane as it broke up, and unbuckled from his seat at some point before his parachute deployed automatically. It’s unclear at this point why the same thing didn’t happen for his copilot, Michael Alsbury.

Now, as spaceflight goes commercial, the destruction of both Spaceship Two and the Antares unmanned rocket is likely to bring the eyes of federal regulators back towards an industry that has until now enjoyed minimal red tape. The Commercial Space Launch Amendments Act, first passed by Congress in 2004, was designed to encourage innovation by keeping the rules not so stringent for the fledgling private space industry. But “the moratorium [was designed to] be in place until a certain date or the event of the first death,” Joanne Irene Gabrynowicz, editor-in-chief of the Journal of Space Law, told the MIT Technology Review. “Unfortunately, the first death has now occurred, and the FAA will likely revisit the need for regulations, if any.”

A Virgin Galactic spokesperson said in an email that the company couldn’t comment too broadly about the escape mechanisms for its spacecraft, due to the pending investigation. The spokesperson did confirm there are two exits from the cabin, but said that “specific design elements of the passenger cabin and spacesuits are still being developed and have not been made public.”

Since the earliest days of the space program, researchers have tried to develop realistic ways to provide astronauts with an emergency exit. But in an emerging field of such complexity, what mechanisms are plausible…and practical? Here’s a brief history of the effort so far.

Condition One: Failure To Launch

One of the most dangerous parts of an astronaut’s journey is the very beginning. To maximize the chance of survival during a launch, most spacecraft from the Mercury project onwards have incorporated a launch escape system (LES), which can carry the module containing the human crew away from a sudden threat to the rest of the craft—either while still on the launch pad, or during the initial ascent.

The Apollo LES was powered by a solid fuel rocket. At the first sign of trouble (transmitted by the loss of signal from wires attached to the launch vehicle), the LES would fire automatically, steering the command module up and away from danger, then jettison and allow the module to open its parachute and land. A similar principle lies behind the launch escape mechanisms used for Russia’s Soyuz capsules and the Shenzhou capsule used by the Chinese space program. The Orion spacecraft, NASA’s next generation of manned craft in development, also features an LES mounted on top of the craft, called a Launch Abort System.

On the private industry side of LESs, SpaceX’s Dragon capsule incorporates the rocket motors of the escape mechanism into the sides of the capsule itself, instead of mounting the LES on top. Since the LES isn’t discarded after launch, this “pusher” method provides the capsule with emergency escape capability throughout the entire flight—something the Space Shuttle and Apollo crafts never had, the company notes. (The drawback is that, if unused, all that fuel for the escape system is extra weight to carry around). Testing Dragon’s abort system both on the launch pad and in flight is something SpaceX expects to have done by January.

Using one of these devices is no picnic. Orion’s LAS was estimated to put about 15.5 Gs of force on an astronaut—more than a fighter pilot experiences, but a little alleviated by the fact that the astronauts are lying on their backs. “They’ll feel the effects,” Orion’s launch abort systems director Roger McNamara told Space.com, but “the bottom line is they’ll be walking away.”

In the 1960s, General Electric tested an emergency inflatable device called MOOSE (Manned Orbital Operations Safety Equipment, but originally Man Out Of Space Easiest) that was basically a small rocket motor attached to a six-foot-long polyester bag equipped with a heat shield, life support system, radio equipment and parachute. After a space-suited astronaut exited his or her space vehicle and climbed into the bag, he or she would activate pressurized canisters that filled it up with polyurethane foam.

More recently, NASA explored a new escape pod design called the X-38, a 7-person lifeboat designed to provide an escape route for astronauts on the International Space Station (say in case the Soyuz space capsule were damaged, or made unavailable because of political infighting, or hijacked by Sandra Bullock). This design made it as far as test flights, but was scrapped in 2002 over budget concerns.

What if a disaster trapped astronauts on the moon? To prepare for that contingency, NASA worked on designs for unmanned Gemini Lunar Rescue Vehicles that could scoop up a marooned crew of two or three astronauts from the lunar surface, or from orbit around the moon. But funding cutbacks during the Apollo program prevented the agency from fully exploring these designs.

Condition Four: Trouble With The Landing

NASA’s space shuttles had an inflight escape system to be used only when the orbiter could not land properly after reentering orbit, which used a pole that extended out from one of the side hatches. The astronauts would hook themselves to the pole with a Kevlar strap and then jump out, allowing the pole to guide them out and underneath the left wing of the spacecraft. However, for this exit system to work, the space shuttle would have to be in pretty good shape, capable of staying in controlled, gliding flight. You can see the pole being used in this test footage here: 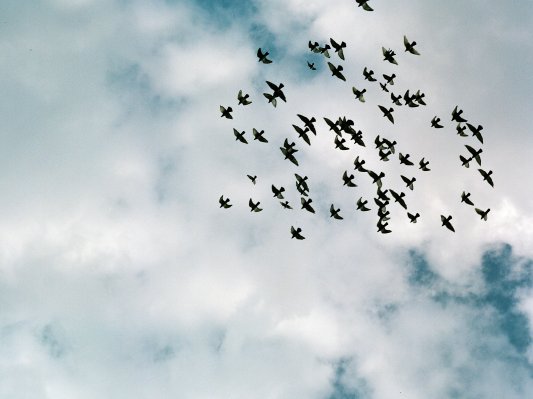 Your State Bird Could Be Gone By 2080
Next Up: Editor's Pick