For decades, Bill Cosby has cultivated his image as a gentle, sweater-clad universal father figure. He was Dr. Heathcliff Huxtable guiding his fictional television children toward smart decisions. He was the Jell-O pitchman, peddling pudding pops as a wholesome snack. And he fashioned himself as the voice of paternal reason for younger black men, urging them to pull up their pants and stay in school. Even if we didn’t agree with him, Cosby’s moral authority meant that when he talked, we listened.

That carefully-crafted image has taken a hit in recent weeks as decade-old accusations that Cosby drugged and raped or molested numerous women have resurfaced. More than a dozen women have now accused the comedian and actor of sexual assault or rape. Cosby has never been criminally charged and has denied the allegations. So what accounts for the renewed attention? And how did these allegations emerge in the first place? Here’s a timeline of how we got here:

Andrea Constand, the former director of operations for the Temple University women’s basketball team, files a lawsuit against Cosby, alleging that he drugged and molested her at his home in Pennsylvania in 2004. A local prosecutor had declined to file charges related to the alleged abuse. After Constand’s accusations become public, a second woman, Tamara Green, says on the Today Show that in the 1970s, Cosby gave her pills that knocked her unconscious and then groped her. Court papers in the Constand case mention Green and 12 anonymous women who make similar allegations against the actor and comic. Cosby denies ever molesting any of the women.

The Philadelphia Daily News publishes a story identifying Beth Ferrier as one of the anonymous woman mentioned in the Constand court papers. Ferrier says Cosby drugged and sexually assaulted her in a car in Denver in the 1980s. (The Guardian later reports that Ferrier told her story to the National Enquirer in 2005, but the tabloid killed the story under pressure from Cosby’s lawyers and published his rebuttal and denial instead.)

Constand and Cosby settle the lawsuit out of court. The terms are not disclosed.

Barbara Bowman, another anonymous woman from the Constand lawsuit, tells People that Cosby had mentored her as an actor in the 1980s and sexually assaulted her in Reno and New York City during that time.

NBC reveals details about a new comedy show it’s developing that will star Cosby as the patriarch of an extended family. The network first announced the show in January.

Netflix announces it will air a Cosby stand-up special on Nov. 28.

Cosby: His Life and Times, a biography by Mark Whitaker, formerly of Newsweek and CNN, is published. Cosby cooperated with Whitaker and the book does not document the rape and molestation accusations against Cosby. Asked why, Whitaker later said in a statement, “I was aware of the allegations, but ultimately decided not to include them in my book. I didn’t want to print allegations that I couldn’t confirm independently… there were no independent witnesses and no definitive court findings, which did not meet my journalistic or legal standard for including in the biography.”

Meanwhile, the Smithsonian announces Bill and Camille Cosby will loan their collection of African and Africa-American art to the museum.

Comedian Hannibal Buress repeatedly calls Cosby a rapist during a show in Philadelphia. A clip of Burress’ standup bit goes viral and in its wake, the Daily Mail publishes a more detailed account of Barbara Bowman’s original accusations. In the article, Bowman says Cosby raped her and calls the actor “a monster.” Buress later tells Howard Stern he had been accusing Cosby of rape on stage for months before the routine got wider notice.

TMZ reports that a planned Cosby appearance on the Queen Latifah show has been canceled.

The Washington Post publishes an op-ed by Bowman, in which she repeats her allegations.

Cosby’s Nov. 19 appearance on the Late Show With David Letterman is canceled.

In an NPR interview with Cosby and his wife Camille, who were on hand to discuss loaning their art collection to the Smithsonian, host Scott Simon asks Cosby to respond to the “serious allegations” that have been raised about him “in recent days.” Cosby refuses to answer, staying silent and shaking his head.

A lawyer for Cosby releases a statement on the actor’s personal website calling the sexual assault and rape allegations “discredited” and saying, “Mr. Cosby does not intend to dignify these allegations with any comment.” The reported statement appears to have been removed from Cosby’s website.

The website Hollywood Elsewhere publishes an account by a woman named Joan Tarshis, in which she says Cosby drugged and raped her in New York City in 1969.

On The View, Whoopi Goldberg expresses skepticism about the accusations leveled against Cosby, wondering aloud why one woman who came forward did not go to the police or hospital after the alleged assaults. Of the settlement reached with Andrea Constand, the original accuser, Goldberg said, “Settlements don’t necessarily mean you’re guilty. You generally settle because you don’t want to put your family through it again…I’m going to reserve my judgement. I have a lot of questions.”

Model Janice Dickinson tells Entertainment Tonight that Cosby raped her in 1982 and that she never reported the alleged incident to police. Cosby lawyer Martin Singer calls the Dickinson allegation a “complete lie.” Meanwhile, Netflix says it is postponing its Cosby stand-up special that was scheduled to air Nov. 28.

NBC announces it is halting development of its new show starring Cosby.

Previous Cosby accuser Tamara Green writes an op-ed for the Entertainment Tonight website in which she says police and a prosecutor did not respond to her complaints that Cosby sexually assaulted her. A lawyer for Cosby had previously said Cosby did not know the woman, nor did he assault her.

The Associated Press releases a portion of a video interview shot on Nov. 6 in which Cosby refuses to answer questions about rape allegations made against him. “I don’t talk about it,” Cosby says. The comedian and his wife Camille were being interviewed about loaning art to the Smithsonian. Once the formal interview concludes, but with the camera still rolling, Cosby asks the reporter never to air the part of the video in which he is asked and refuses to comment. “I would appreciate it if it was scuttled,” says Cosby.

A woman claiming to be one of the alleged anonymous Cosby victims mentioned the 2005 Constand lawsuit tells her to story to People. Therese Serignese says she was 19 when she met Cosby in Las Vegas in 1976. She says he invited her to a backstage green room after a show and offered her Quaaludes, which she accepted. The comedian then sexually assaulted her, Serignese alleges. The woman also says that she subsequently had a sexual relationship with Cosby and later asked him for money

An actress named Louisa Moritz, tells TMZ that Cosby sexually assaulted her in 1971 while she was waiting backstage to appear on the Johnny Carson show. Cosby lawyer Martin Singer tells TMZ, “We’ve reached a point of absurdity. The stories are getting more ridiculous.”

Renita Chaney Hill tells a local news station in Pittsburgh that she met Cosby in the 1980s, accepted money from him and believes he drugged and sexually assaulted her in various hotel rooms.

Cosby performs a show at the Atlantis resort in the Bahamas.

Angela Leslie tells the New York Daily News that Cosby sexually assaulted her in a Las Vegas hotel room in 1992.

Kristina Ruehli tells Philadelphia magazine she was one of the anonymous accusers mentioned in the Constand lawsuit. Ruehli says while she was a secretary at a talent agency that represented Cosby, he invited her to his house where he drugged her and tried to force her to perform oral sex.

Read next: Yes, Bill Cosby Actually Told a Joke About Drugging Women In a Comedy Routine 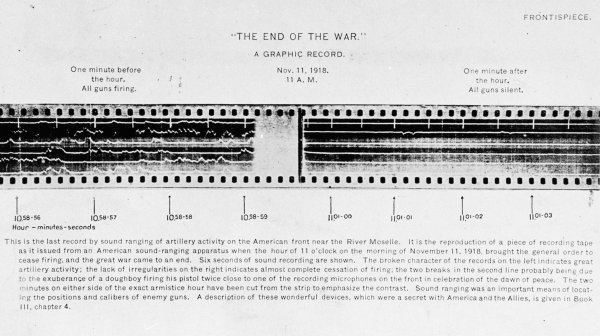 Silence Visible: This Is What the Sound of WWI's Ceasefire 'Looked' Like
Next Up: Editor's Pick