Director Sophie Hunter (L) and British actor Benedict Cumberbatch arrive for the US premiere of "The Imitation Game" at the Ziegfeld Theatre in New York on November 17, 2014.
Jewel Samad—AFP/Getty Images
By Eliana Dockterman

Today, the Internet was blessed with not one but two Benedict Cumberbatch interviews, one in New York and the other in FastCompany. Cumberbatch fielded even more questions from the press last night when he and his new fiancée Sophie Hunter made their red carpet debut together.

In case you don’t already know enough about “the Internet’s boyfriend” and star of the upcoming biopic The Imitation Game, here are a few more tidbits:

2. He wants to play someone dumb: After playing Sherlock (Sherlock), Khan (Star Trek Into Darkness), Julian Assange (The Fifth Estate) and Alan Turing (The Imitation Game), Cumberbatch is ready to play a meathead: “If anyone’s got any other stupid people I can play, let me know.”

3. He’s ready for his romantic lead: The closest Cumberbatch has come to seducing the ladies onscreen — not counting that dream sequence with Molly — was as the wolf in Penguins of Madagascar, in a sequence that ended up being cut. “I’ve never had a [Ryan] Gosling moment as a character. I’ve never been the kind of guy who’s made all the girls go gooey. I think it’s about time I did.”

4. But he doesn’t think Sherlock is a virgin (even though he’s called one on the show): “Yeah, I think [Irene Adler and Sherlock Holmes] were definitely at it after he ­rescued her from the beheading in Pakistan. I’m sure they were. I’m convinced of that.”

5. He does his research: Cumberbatch has a busy schedule ahead of him: He’s shooting Richard III for BBC over Christmas, filming the fifth season of Sherlock in January and then taking the stage as Hamlet — a show that sold out in one day — this summer. “If you looked at my desk upstairs in my hotel room, there are not one, not two, but four books on the plays I’m about to do. There are two Turing biographies. There is just a s–tload of other stuff on that on my Kindle. Because, of course, I’ve got time to sit down and f**king read everything! It’s ridiculous.”

6. He’s a little bit obsessive about his inbox: “I do get a panic attack when I look at other people’s phones and they have 1,200 emails. It really makes me go, ‘How do you swallow your food? I don’t understand how your body actually functions.'”

7. He was pleasantly surprised by the fan reaction to his engagement announcement: “It’s a crazy old love bomb to drop and the amount of love that comes back to you, that was the thing that [Hunter and I] are both just sort of bowled over by. It’s wonderful.” 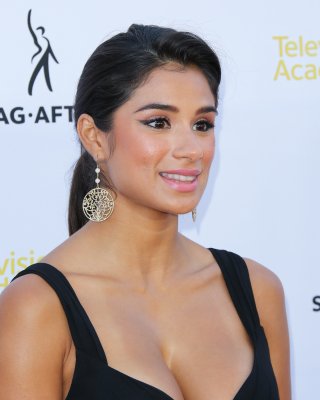