A Historical Argument Against Uber: Taxi Regulations Are There for a Reason

New York taxis used to have a reputation for smelly cars, ripped seats and eccentric drivers. Today, New York cabs are nearly all clean and well-maintained. Drivers don’t usually say much unprompted. The cabs feel safe. In other words, they’re boring. And maybe that’s a good thing, because they’re vying against a polished new competitor.

Uber, the ride-sharing app, has grown explosively in the five years since its inception, challenging established taxi services, expanding its annual revenue to a projected $10 billion by the end of next year and attracting drivers away from its competitors. Uber drivers get 80% of a fare, and the company only takes a 20% cut. Uber’s cars are mostly slick, clean and easy to hail via the company’s app.

But a big reason Uber has grown so quickly is that it’s not regulated the same way that traditional taxi services are. Uber proponents say it’s about time for monopolistic, overregulated city cab services to be broken up. Riders deserve options, they say, and better pricing, and more nimble technology. Still, the company is no stranger to controversy, most recently over reports of executives abusing the company’s ability to track riders.

And, says one taxi expert, history shows that the larger reason to be concerned about Uber is that those regulations were established for a good reason.

Graham Hodges is the author of Taxi! A Cultural History of the New York City Cabdriver and a professor at Colgate University — and a former cabbie himself, who patrolled New York’s dangerous streets in the early 1970s for a fare. Hodges is suspicious of upstarts like Uber and says that the cab industry needs to be regulated.

Hodges’ argument? Taxis are pretty much a public utility. Like subway and bus systems, the electric grid or the sewage system, taxis provide an invaluable service to cities like New York, and the government should play an important role in regulating them. They shouldn’t be, Hodges argues, fair game for a private corporation like Uber to take over and control, any more than an inner-city bus service should be privatized.

Without getting too much into the nitty-gritty of taxi rules, what do passengers get out of cab regulation? Regular taxi maintenance, says Hodges, which taxi commissions like New York’s require. “You want to know you’re getting in a safe cab that’s been checked recently,” he explains. “They’re taking a pounding every day.” Knowing your fare is fixed to a predictable formula is important, too, says Hodges. (Uber does that, though the company’s surge pricing at peak hours can really up the cost.) And you want to know that your driver has had a background check, which established taxi services usually require, so that you can be less afraid of being attacked with a hammer, abducted or led on a high-speed chase, as has allegedly happened on some Uber trips.

Regulations have been around for a long time, Hodges says: “Taxi regulations developed out of livery and hansom-cab regulations from the 19th century. They’re a necessary part of urban transportation. They’ve been that way since the metropolitization of cities in the 1850s. And those in turn are based on a long-term precedent in Europe and other parts of the world. From hard-earned experience, those regulations ensure fairness and safety.”

In the 1970s, when Hodges drove, those regulations ensured that a driver made a decent living, and could comfortably choose his or her own hours. (“I made $75 the first night I was out,” he says. “I felt fantastic.”) The golden days of cab driving, Hodges continues, were even earlier, in the ’50s and ’60s. Think sometime before seedy New York full of troubled men like Robert De Niro in Taxi Driver (1976), and more like the omnipresent, wise-seeming driver of Breakfast at Tiffany’s (1961).

“Back then, drivers stayed on for a long time,” says Hodges. “They were beloved. They were culturally familiar. That’s where you get the classic cabbie and someone who was an encyclopedia of the city. Those are guys who dedicated their lives to the job and owned their taxis. They had a vested interest in a clean, well-managed auto that lasted a long time.”

Today, Uber drivers do enjoy some of those benefits. Though they’re hardly known for an encyclopedic knowledge of the cities they drive, or as cultural touchstones, they own their own cabs and have a lot at stake in driving. What’s more, they get a large cut of each fare and have a lot of freedom. And regulation doesn’t always work the way it’s supposed to: even after the Taxi and Limousine Commission started more closely regulating taxi drivers in the 1970s, riders were often in for a surprise. Taxis were rusty tin-bins and drivers were erratic.

In 1976, TIME offered a sardonic view of the New York cab ride:

In the end, Hodges says, cabbies and passengers have always wanted the same things — “We don’t want to have hyper competition, we don’t want reckless driving, we don’t want drivers about whom we don’t know very much,” he says — and, whether or not it always works perfectly, he believes that history has shown that regulation is the best way to get there. 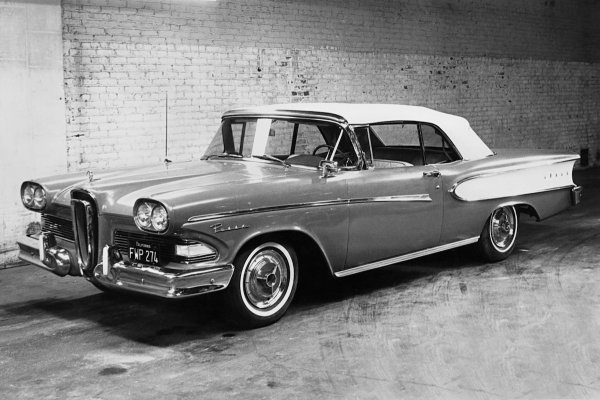 What Happened to the Car Industry's Most Famous Flop?
Next Up: Editor's Pick