Hong Kong officials began enforcing the first of several court injunctions and started removing barricades in part of the downtown Admiralty district on Tuesday morning, in the first attempt to clear the streets through judicial means since the Umbrella Revolution began almost two months ago.

But if the action was meant as a show of strength by the unpopular administration of Chief Executive Leung Chun-ying against protesters who are demanding free elections, it was a failure and at times degenerated into farce.

The injunction had been obtained by the owners of an office building, CITIC Tower, against demonstrators who had erected barricades partially blocking vehicular access to the property, which looms over Tim Mei Avenue on the fringe of Hong Kong’s largest protest area.

However, bailiffs were only able to hastily remove a few barricades because the locations of those targeted for removal were only vaguely marked on maps relating to the injunction, allowing protesters to dispute the precise terms of the court order.

Nervous looking representatives of CITIC Tower were drowned out by a cocksure protester with a loudhailer as they attempted to negotiate. Nimble young students in hoodies and face masks were also able to seize metal barriers before white-gloved, middle-aged bailiffs could reach them. The students then carried the barriers off to reinforce barricades erected elsewhere.

Pro-democracy legislator Albert Ho, who has been giving legal advice to the protesters, said the fact that a private entity such as CITIC Tower had to resort to a civil action to clear the barricades showed the government’s weakness.

“The only explanation is that the administration has lost its confidence — because of a lack of authority and a lack of legitimacy — to enforce the law,” he said.

Earlier in the day, uniformed and plainclothes police remained on standby as bailiffs read out a court order to smirking students before dismantling the makeshift barricades. But none of the expected clashes materialized. Instead, most demonstrators lazed in the bright fall sunshine, while 18-year-old student leader Joshua Wong nonchalantly skateboarded up and down the road.

Around the corner on Harcourt Road, the main protest area, dubbed Umbrella Square, lay unmolested. Hundreds, perhaps thousands of tents, formed a sea of color. At the western extremity of the site a large yellow banner read “Welcome to the Hong Kong Commune.”

Thousands of protesters have occupied crucial roads in the Admiralty district — a city-center area of gleaming corporate towers and the central government offices — and two other major commercial areas since a campaign of civil disobedience first commenced on Sept. 28.

They are seeking full democracy for Hong Kong, with the right to freely nominate and vote for candidates for the city’s top job. At present, the territory’s sovereign power, China, will only permit direct elections if it vets the candidates.

However, seven weeks in, the movement appears to be losing part of the goodwill it once enjoyed among the city’s residents. Ongoing traffic delays are forcing some parents to leave home before dawn to get their children to school on time, while retailers in the protest zones have seen their takings plummet.

A new survey published by the Chinese University of Hong Kong this week claimed that approximately 67% of the city’s residents are now in favor of the demonstrators leaving the streets.

But the feeble enforcement action on Tuesday shows that it will be difficult to dislodge the protesters, who continue to enjoy high levels of morale.

“Students and activists will respect the judgment of the courts,” Joshua Wong told TIME. “But it’s unnecessary to clear the whole of Tim Mei Avenue.”

For now, the protest site remains virtually unchanged. But many believe that today was merely a dress rehearsal for what is to come.

“This morning is more or less intended to be a show for the public,” said legislator Ho. He said he thought that the government also wanted to show the more radical protesters encamped across Victoria Harbor in the Mong Kok area of Kowloon, that it was serious about enforcing the law.

Others believe that it is only a matter of time before the government takes a tougher approach. “We think they are waiting for the right time to do something,” said protester Alex, 22. “We just don’t know what’s going to happen.” 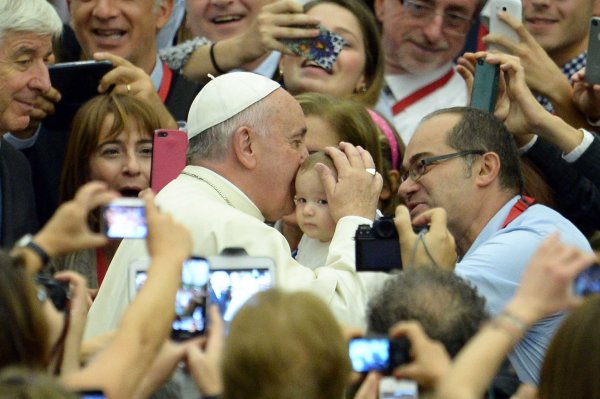