Dancing With the Stars Watch: The Semifinals Unplugged

It was the semifinal round of Dancing With the Stars, and the five remaining couples had their work cut out for them — and not just getting into their skin-tight spandex costumes. Tonight, the semifinalists had to perform a classic DWTS routine followed by a slowed-down performance to an acoustic version of the same song. At the end of the night, one person goes home and the rest advance to the finals, which are efficiently spread out over two nights next week.

Here’s what happened in the semifinal round of Dancing With the Stars:

Sadie Robertson and Mark Ballas: Last week, the judges completely missed the fact that Sadie miffed the last minute of her routine, but Sadie knew in her heart she had screwed up and cried on Mark’s shoulder. This week, she hit the floor in head-to-toe sequins and managed to perform a quick step to Ariana Grande’s “Problem” without a single, yep, problem. Head judge Len Goodman was “disappointed” with the routine “because there was nothing [he] didn’t like about it.” 37/40, including a 10 from Len, but mostly because she bribed him with this photo.

Tommy Chong and Peta Murgatroyd: Tommy had his bags packed to leave last week, but at 76 years old he made it to the semifinals to dance a jazz routine with a leather-and-lace-clad Peta to “Tainted Love.” Beats retiring to Boca, eh? Len admitted that he couldn’t have done what Tommy just did on the dance floor, while Bruno Tonioli gave the credit to Peta, whom he referred to as “a human defibrillator.” Maybe she should make herself available to the Red Cross? 28/40

Janel Parrish and Val Chmerkovskiy: Val imported his big brother Maks for a rehearsal-room pep talk and an adorable Chmerkovskiy brother spin across the dance floor. Val is really worried that he’s getting older and hasn’t won a Mirror Ball yet and is determined to make a real go at it with Janel. To wit, he delivered a black-clad dramatic paso doble to Calvin Harris’ “Blame.” The second it ended, the crowd was on its feet cheering, and Carrie Ann Inaba was begging for more. Len was worried that Maks was going to be a bad influence on Val, but even Len was impressed with the chic routine. 40/40

Alfonso Ribeiro and Witney Carson: Alfonso told TIME last week that the biggest question mark about this competition was whether his body would hold up for the rest of his run. Last week, while attempting to protect his groin injury, he injured his back and ended up at the doctor, who urged him to give his body a break. Instead, he hit the dance floor for an Argentine tango. The judges admitted that they could tell he was in pain while he danced, but threw around lots of words like fighter and tough while Alfonso cried actual tears and swore he was going to make it through the next dance. Carrie Ann encouraged to “go safe, but go hard” in the next round. 36/40

Sadie and Mark, Part II: For the big push into the finals, Sadie called in the troops, and the entire Duck Dynasty crew came out for the video package, which also included clips of baby Sadie preaching about her love of God. For their Argentine tango, Mark kept it PG-rated by keeping a guitar between them at all times, which was an odd but effective chaperone for the couple. Len was not impressed by the guitar maneuver, but Utah girl (and Flashdance star) Julianne understood the need to be chaste. For her part, Sadie thinks she’s matured a lot over the course of the nine-week competition. 36/40

Tommy and Peta, Part II: For his video package, Tommy’s wife and children, including Rae Dawn Chong, naturally, talked about how proud they are of their dad. Then his comedy partner, Cheech, reminded the world that Tommy is just really freakin’ awesome. After that lead-in, there was no way he couldn’t deliver on the dance floor. Their Christmas-toymaker-themed rumba to “Tainted Love” was one of those only-on-Dancing With the Stars moments. Peta played a snow-globe doll that came to life to dance with her velvet-clad toymaker — and it kind of worked? Julianne, who is Tommy’s biggest booster, thought it was “magical,” “awesome” and “so great” and almost broke into tears. Carrie Ann was crying by the end of the routine, tears were rolling down Peta’s face and Erin Andrews was all choked up too. 34/40

Bethany and Derek, Part II: Bethany was bullied before she found her voice on YouTube, and in her video package, her family recounted her tough years. Luckily, it clearly all turned out well, because Bethany is now dancing with a shirtless Derek on national television. Their contemporary routine was set to a surprisingly haunting acoustic version of Jackson Five’s “I Want You Back.” Bruno said the routine belonged in an art gallery and called it a “modern masterpiece” and Carrie Ann said she “didn’t want to blink” so she wouldn’t miss a moment. 40/40

Janel and Val, Part II: Janel’s family left Hawaii so Janel could follow her dreams of acting and dancing, which is probably a lot of pressure for a young girl, but she finally got a job as Mona on Pretty Little Liars, so all’s well that ends in paychecks. The band Time for Three (with a guest appearance by Val on violin!) performed a string version of Calvin Harris’ “Blame” to accompany their Argentine tango. The routine was filled with fluid movements and jaw-dropping lifts (made even more jaw-dropping by the fact that Janel performed them in a low-cut, high-cut sparkly lace dress). Len thought they put the “oo in mood” and confirmed that she is an incredible dancer, but Lift Police Carrie Ann thought the transitions between the lifts were rough. 38/40

Alfonso and Witney, Part II: If there was ever going to be a moment for the Fresh Prince himself to come out and support his “brother” it would be now, but apparently Will Smith is just too busy. Alfonso did however get Ricky Schroeder to show up and remind us that he was on Silver Spoons. Plus, his Bel Air sisters Tatyana Ali and Karyn Parsons and butler Joseph Marcell showed up to recount some behind-the-scenes moments from the Fresh Prince set. Then, for absolutely no reason other than to entertain, well, me, former Vice President of the United States Dan Quayle endorsed Alfonso for Mirror Ball holder. Once on the dance floor, Alfonso’s and Witney’s contemporary routine to Christina Grimmie’s cover of One Republic’s “‘Til The Love Runs Out” was the dance equivalent of the satin pajamas they wore for the number — fluid, shiny and easy on the eyes. 39/40

In jeopardy: Unfortunately for Alfonso, he has to return next week and continue to watch his body crumble. Also headed to the finals are Bethany and Derek, and Janel and Val. That left Sadie and Tommy in jeopardy.

Who went home: Tommy Chong. While it was always fun to watch Tommy dance, he remained on the show due to his charm and humor, more than talent. His departure before the final is no real surprise, but no less sad.

Best reason to come back next week: It’s the finals, and someone is taking home the Mirror Ball trophy.

Read next: Alfonso Ribeiro Talks About Heading to the Semi-Finals on Dancing with the Stars 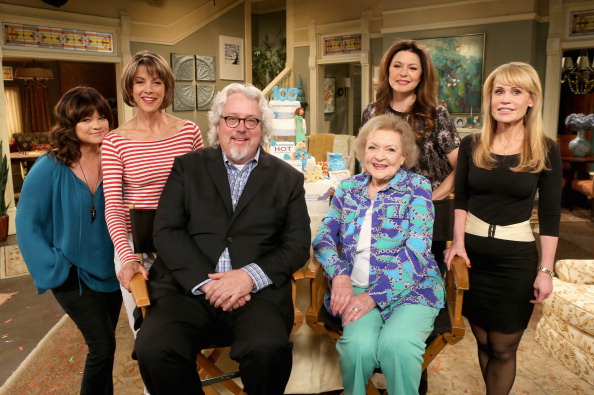 Hot in Cleveland to End Run After 6 Seasons
Next Up: Editor's Pick