Feminist Is a 21st Century Word

I know, I know, TIME’s annual word-banning poll is meant as a joke, and this year’s inclusion of the word feminist wasn’t an attempt to end a movement. But as a writer — and feminist who naturally has no sense of humor — banning words feels, well, uncomfortable. The fault lies in the usage or overusage, not the word — even dumb or faddish words.

Feminist is neither of those. Nevertheless, I once loathed it. In 1968, while organizing the first protest against the Miss America Pageant, I called myself a “women’s liberationist,” because “feminist” seemed so 19th century: ladies scooting around in hoop skirts with ringlet curls cascading over their ears!

What an ignoramus I was. But school hadn’t taught me who they really were, and the media hadn’t either. We Americans forget or rewrite even our recent history, and accomplishments of any group not pale and male have tended to get downplayed or erased — one reason why Gloria Steinem, Jane Fonda and I founded the Women’s Media Center: to make women visible and powerful in media.

No, it took assembling and researching my anthology Sisterhood Is Powerful to teach me about the word feminism. I had no clue that feminists had been a major (or leading) presence in every social-justice movement in the U.S. time line: the revolutionary war, the campaigns to abolish slavery, debtors’ prisons and sweatshops; mobilizations for suffrage, prison reform, equal credit; fights to establish social security, unions, universal childhood education, halfway houses, free libraries; plus the environmentalism, antiwar and peace movements. And more. By 1970, I was a feminist.

Throughout that decade, feminism was targeted for ridicule. Here’s how it plays: first they ignore you, then laugh at you, then prosecute you, then try to co-opt you, then — once you win — they claim they gave you your rights: after a century of women organizing, protesting, being jailed, going on hunger strikes and being brutally force-fed, “they” gave women the vote.

We outlasted being a joke only to find our adversaries had repositioned “feminist” as synonymous with “lesbian” — therefore oooh, “dangerous.” These days — given recent wins toward marriage equality and the end of “don’t ask don’t tell” in the military, not to mention the popularity of Orange Is the New Black — it’s strange to recall how, in the ’70s, that connotation scared many heterosexual women away from claiming the word feminist. But at least it gave birth to a witty button of which I’ve always been especially fond: “How dare you assume I’m straight?!”

Yet in the 1980s the word was still being avoided. You’d hear maddening contradictions like “I’m no feminist, but …” after which feminist statements would pour from the speaker’s mouth. Meanwhile, women’s-rights activists of color preferred culturally organic versions: womanist among African Americans, mujerista among Latinas. I began using feminisms to more accurately depict and affirm such a richness of constituencies. Furthermore, those of us working in the global women’s movement found it fitting to celebrate what I termed a “multiplicity of feminisms.”

Flash-forward to today when, despite predictions to the contrary, young women are furiously active online and off, and are adopting “the F word” with far greater ease and rapidity than previous feminists. Women of color have embraced the words feminism and feminist as their own, along with women all over the world, including Afghanistan and Saudi Arabia.

As we move into 2015, feminism is suddenly hot; celebrities want to identify with it. While such irony makes me smile wryly, I know we live in a celebrity culture and this brings more attention to issues like equal pay, full reproductive rights, and ending violence against women. I also know that sincere women (and men of conscience), celebs or not, will stay with the word and what it stands for. Others will just peel off when the next flavor of the month comes along.

Either way, the inexorable forward trajectory of this global movement persists, powered by women in Nepal’s rice paddies fighting for literacy rights; women in Kenya’s Green Belt Movement planting trees for microbusiness and the environment; Texas housewives in solidarity with immigrant women to bring and keep families together; and survivors speaking out about prostitution not being “sex work” or “just another job,” but a human-rights violation. From boardroom to Planned Parenthood clinic, this is feminism.

The dictionary definition is simple: “the theory of the political, economic, and social equality of the sexes.” Anyone who can’t support something that commonsensical and fair is part of a vanishing breed: well over half of all American women and more than 30% of American men approve of the word — the percentages running even higher in communities of color and internationally.

But I confess that for me feminism means something more profound. It means freeing a political force: the power, energy and intelligence of half the human species hitherto ignored or silenced. More than any other time in history, that force is needed to save this imperiled blue planet. Feminism, for me, is the politics of the 21st century. 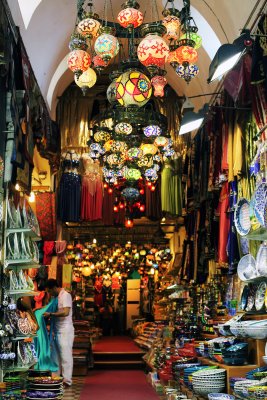 These Are the Most Visited Tourist Attractions in the World
Next Up: Editor's Pick