Why Google Glass Isn't the Future

An attendee tries Google Glass during the Google I/O developer conference on May 17, 2013 in San Francisco, California.
Justin Sullivan—Getty Images
By Alex Fitzpatrick

When Google first released Glass last Spring, the device immediately rocked the tech world. The wearable computer that puts a small screen in users’ field of vision to display directions, messages or video calls was quickly spotted at tech conferences, on TV pundits’ faces and, eventually, on the streets of tech-centric cities like San Francisco and New York. Google pitched Glass as a gadget that can help users take notes, get directions or take a picture, all without using their hands. There are now dozens of apps available for Glass, from news and weather apps to a Battleship-style game.

At first, it looked like Google might have been about to unlock a whole new way of computing, and developers at top websites and media outlets scrambled to pop out rudimentary apps for Glass just to plant a flag in case the device took off. A year and a half later, however, it’s clear that Glass isn’t going smoothly. Several developers working on apps for Glass have suspended their projects, Reuters reported Friday, in a story that seems to ask, “Hey, remember Google Glass?”

“While Glass may find some specialized, even lucrative, uses in the workplace,” the Reuters story reads, “its prospects of becoming a consumer hit in the near future are slim, many developers say.” Developers, fearing a lack of adoption, are headed for the hills, and it’s looking like Google’s Glass hopes could be shattered.

Part of the fault lies with the way Google introduced Glass to the world. Instead of making it available immediately to all interested buyers, Google launched what it called the “Explorers” program, which meant only those consumers who received an invite from the search giant had the privilege of forking over $1,500 for a pre-market version of Glass. Google has been quiet about how many people were invited to the Explorers program, meaning it’s hard to get any precise numbers on how many Glass units the company has sold to date. (The Explorers program has since gone public.)

From a developer’s perspective, it takes a massive leap of faith to keep working on software for a device with unknown demand. It could be true that Glass will be a huge hit on the consumer market if and once it’s publicly released on the mass market, as evidenced by how quickly the company sold out of Glass units when Google suspended the invite-only rule for a day before later offering the beta version to anybody who paid up. But it could be equally true that anybody who wants Glass has already gotten a pair, meaning there won’t be any demand for the device on the mass consumer market — and the supply of below-cost Glass units already for sale on eBay is evidence in that direction.

While Glass found fans among early adopters and technophiles at first, it was also immediately met with skepticism, ridicule and even outright fear in the mainstream. Its camera, in particular, has raised serious privacy concerns as people fear being recorded without their knowledge. Glass users found themselves singled out, labeled with a derogatory nickname (“glassholes”), and banned from movie theaters, bars and other businesses. Whether to avoid the stigma of wearing Glass or just because the device’s promise is in question, there are suddenly plenty of reasons to doubt its future. Google co-founder Sergey Brin has said a consumer version of Glass would be on store shelves this year, but it’s increasingly looking like that won’t happen until next year, if at all.

Wearable devices are bound to be the next big thing, and maybe Glass will find a use in some professional field like medicine. But if Glass fails with consumers, it will likely be because it is too different, too soon. This is a familiar pattern for technology. (Most of us don’t want to go around town looking like Star Trek’s Geordi La Forge.) Instead, the most successful wearables will just quietly replace the dumb versions of stuff we already wear. That’s already happening with our watches — and nobody’s going to get banned from a bar for wearing an Apple Watch.

If Glass has a path to salvation, it’s in a refreshed version that takes a page from smartwatches and looks more familiar than different. But the good news here for Google is that it already has a grip on the smartwatch world, with its Android Wear and Google Now software powering the best models on the market today. 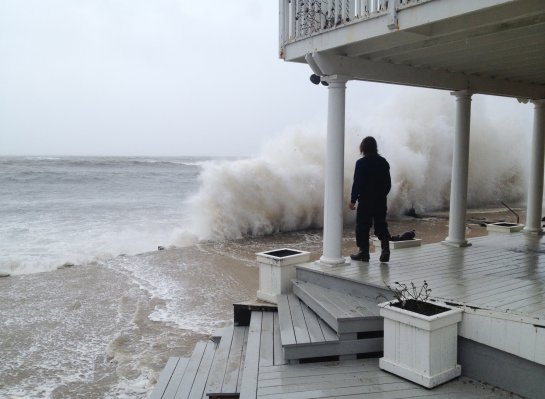 These 5 Emergency Gadgets Can Save Your Life
Next Up: Editor's Pick