Dumb and Dumber To Gets Stupid at the Box Office

Jim Carrey and Jeff Daniels arrive at the LA Premiere Of "Dumb And Dumber To" on Nov. 3 2014, in Los Angeles.
Richard Shotwell—Invision/AP
By Nolan Feeney

Adorable robots were no match for old friends at the box office this weekend.

Two decades after the first Farrelly brothers film hit theaters, Jim Carrey and Jeff Daniels reunited for Dumb and Dumber To, which beat out previous box-office victor Big Hero 6 for the No. 1 spot, according to The Hollywood Reporter.

The sequel took in $38.1 million in North America, while Disney’s animated superhero movie came in second place with $36 million, according to preliminary Sunday grosses. (Finalized numbers are expected Monday).

Christopher Nolan’s space epic Interstellar fell to third with $29.2 million this weekend, but its worldwide gross surpassed $300 million on Sunday when it hit $321.9 million. The film is performing very well overseas, particularly in China and on Imax screens.

Also opening this weekend were Foxcatcher (read TIME’s interview with Channing Tatum), Beyond the Lights (about a Rihanna-esque pop star) and Rosewater (Jon Stewart’s directorial debut). 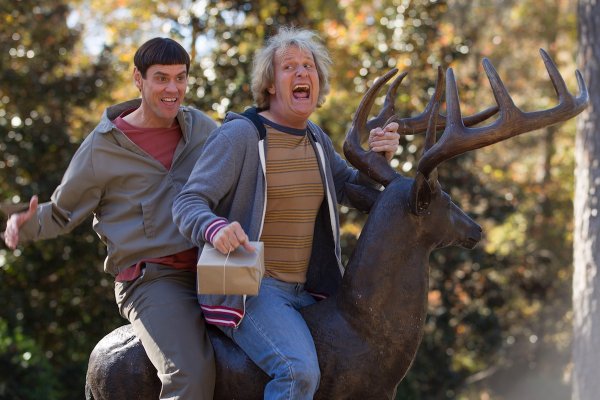