Lifetime will air their much-maligned Aaliyah biopic, Aaliyah: The Princess of R&B, on Nov. 15, starring Alexandra Shipp as the singer. Shipp joined the film late, taking on the role after Zendaya exited following a deluge of criticisms about her casting.

The film follows Aaliyah over the course of her three-album career, ending right before her death in a plane crash at age 22 in 2001, and chronicles her work with R. Kelly, Timbaland and Missy Elliott. Shipp, who sings all of the songs in the film herself, took on the role confidently, ignoring the pushback from fans and the singer’s family.

TIME spoke with Shipp about her portrayal, her recent work in VH1’s Drumline: A New Beat and upcoming N.W.A. biopic Straight Outta Compton, and her response to all the critics.

TIME: How did you end up in the cast after Zendaya dropped out?

Alexandra Shipp: I actually auditioned for it earlier in the year and it was between three girls, including Zendaya. When they went with Zendaya, I was cast in Drumline and started working on that. When we wrapped, I got a phone call asking if I was still interested. At first, I was like “Yes yes yes.” And then I was like, “Wait, hold on, is this kind of crazy?” I went through a range of emotions.

Did you have concerns about the pushback to the movie?

Yeah, totally. After it was released that Zendaya was cast in the role, I remember reading all the backlash. It was kind of ridiculous. I was like, “This girl is a great actress. She’s going to do a great job, and it’s a great production.” Once I got offered it, I wondered if that was going to happen to me. But then I read the script and talked with the producers and talked about how they wanted to make this movie great. I had to put all that stuff aside. I deleted Twitter off my phone. I deleted Instagram. And I just did my job.

It must be a lot of pressure to have everyone commenting on something you haven’t actually done yet.

The expectations are always so low. Everyone is always like, “It’s going to be bad.” And actually I love that because then they’re going to see it and they’re going to have to admit that they were wrong.

Once you knew you had the role, what sort of preparation did you do?

It was a crazy process. I wanted to get my mannerisms down. I wanted to get the way she held herself down. I wanted to get her singing down. I tried my hardest – no one can sound like her, honestly, but I tried really hard and I think it comes through that I was trying to showcase this woman in the greatest light. And I didn’t really have time to prepare physically because Aaliyah was all kinds of fit. She had that perfect cut petite body. We’d be in between scenes and I’d be in my trailer listening to her songs from the year we were about to film and I’d be doing a million crunches.

Your abs are noticeably good in the movie.

Thank you! I was always doing something, whether it was listening to her music or doing squats.

Were you watching a lot of old footage of her?

That’s the greatest thing about this day and age. I can go online and I find every video of this woman. I sat in my apartment and closed all the windows and turned off all the lights and watched video after video after video. What I was looking for was how much she gave the camera and how much she gave behind the scenes. Those little moments. I wanted to capture those little moments because that’s what this movie is truly about. It’s not necessarily about her biggest hits or all her music videos. It’s about how she was able to handle these moments in her life and her relationships with her core group of people. I tried to get her dance moves down too. Just get all of her stuff down – how she laughed, how she moved her shoulders, how she carried herself. How that progressed from 14 to 22.

Was there a moment of her life you were scared of portraying?

It was the R. Kelly stuff. That’s the most intense stuff. For any girl, the first guy we have a crush on is our first love. We love intensely and have all these hormones happening. It was really nerve-wracking having to portray that and have it be with an older man. Luckily Cle Bennett, who played R. Kelly, was brilliant and made me feel really comfortable and we had such fun, great chemistry. He’s very meticulous. I only had ten days to prepare for the role whereas all of the other actors had a few months. Cle was so much like Robert. You can hear it in the way he speaks. But that was definitely the scariest thing, the love they had together.

It’s obviously a known story of how Aaliyah and R. Kelly married in secret when she was 15 and he was 28, but it’s creepy to see it play out onscreen.

Yeah, it is. You look at the situation and you think when you put your child in a room with a producer everything’s going to be cool and okay. And they end up falling in love. You just don’t expect that, especially with such an age gap.

How have you dealt with playing a real person with a family who is invested in seeing her story told right?

It’s a portrayal. I don’t think anyone will know 100 percent what was going through her mind in these situations and how she was able to handle it so beautifully. I have my interpretation of it and I have to be confident in that. That’s all you can do – give your interpretation of someone. Especially when they’ve passed on. When I was shooting [my new movie] Straight Outta Compton I was able to meet [Ice Cube’s wife] Kim and I was able to talk to her and see how she interacted with her husband and her children and get a sense for who she is. I wasn’t able to do that on Aaliyah, which is hard because you want to get it right.

Did you get to talk with anyone who knew Aaliyah?

I got to talk to people who worked with her and people who were old friends. I wasn’t going into it blind. At the end of day, I’ll take anything. And I got to learn some fun, quirky things that we were able to work into the movie.

Will the songs you sing the film be released on a soundtrack?

No, they’re not. And I’m actually really happy about that. I think it’s really great for the movie. Everyone’s going to see that. We want people to buy Aaliyah’s songs. They’re her songs.

It changes, you know? When you listen to the same albums over and over again, your favorites change. For me, One In A Million is my album so “Try Again.” When it comes to her other stuff I love “Back and Forth.” I find little moments in all of her stuff. You can hear how she’s influenced people in music nowadays. She was such an innovator before anyone was doing it. I grew up listening to her music. She’s just amazing.

You also have Drumline out on VH1. Did you learn how to drum for that?

Yeah, it was a really fun, intense process. We drummed for about two weeks. On the first movie they had three or four months to really learn how to drum. Ours was a little more fast-tracked. We learned a lot. The hardest part was the marching. The whole hand-eye coordination, especially when it comes to beating out rhythms, is nerve-wracking. You’re with everyone on the field in these cotton suits and you’ve got this 35-pound metal drum. Those instruments are not light. I was stumbling. I got so bruised up. And we filmed in Atlanta in July when it was 90 degrees with 50 percent humidity. It was so much fun though.

I was a total Nick fan. I was all about that. I’ve watched all his stuff and I was a huge fan of the first Drumline. So when I got to work with him he was cool, he was personable, he was funny. But he’s also a really hard-working businessman. He’s very goal-oriented. I was able to have a chat with him and he was the coolest guy.

When will Straight Outta Compton come out?

We’re all finished shooting it. That comes out next year. I’m not sure when, but I think mid-to-late next year.

Are you purposefully focused on movies with a musical component?

Oddly enough, I never had a focus. But the movies that are being presented in my path are and I’m really lucky to be a part of them. I’ve always loved music and I think it’s really great I get to do both. But it was serendipitous, to be honest. You’re just looking for that next job and it’s really cool when they all have a similar feel.

Inevitably when Aaliyah: The Princess of R&B airs this weekend, it’s going to get some criticism. Do you have a response to the potential haters?

I don’t, really. I worked really hard on this film and I’m confident in a product that everyone worked so hard to put out. And there’s always going to be a critic. All I can say to that is, “Thank you for watching.” 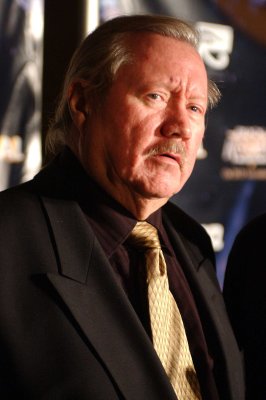 Battlestar Galactica Creator Dead at 77
Next Up: Editor's Pick