The Little Mermaid: Not as Sexist as You Thought It Was

In celebration of The Little Mermaid‘s 25th anniversary — it was originally released Nov. 17, 1989 — Eliana Dockterman and Laura Stampler rewatched a film they hadn’t seen in about a decade and a half. They were pleasantly surprised.

Eliana Dockterman: So we just watched The Little Mermaid. I expected it to be really sexist because of articles like this and this and this.

ED: So, yeah, the fact that she can’t talk isn’t great. But it’s Ursula—the villain—who tells Ariel that men don’t value women talking so it won’t matter if Ariel loses her voice.

LS: And yes, it’s also not great that Ariel is willing to give up her voice for the chance to get a man who plays a mean flute — watch the movie again, he plays the flute a lot — but she is a 16-year-old girl. As a former 16-year-old girl, we don’t always make the greatest of choices in times of crushing.

ED: And in fact the reason Eric won’t marry her right off the bat is because he fell in love with her voice, not her looks. That’s good, right?

LS: Furthermore, he flat-out says he believes that Ariel lost her voice as a part of some big event. So when he doesn’t want to immediately lock lips with the feisty mute, it’s because he doesn’t want to take advantage of a recent trauma victim.

ED: Basically you think Eric is the perfect guy.

LS: A prince among Disney princes. He loves his dog, which is a good sign, and he’s into it when she has the carriage jump over that ravine. He likes daring, empowered women. And, to counter stereotypes, he falls in love with his savior. Eric was the damsel in distress and Ariel rescued him from drowning during a storm.

ED: It’s true. This is why The Little Mermaid is (secretly?) feminist. She saved him first in that shipwreck and then again from being zapped by Ursula’s triton at the end. He ultimately kills Ursula, but she wins 2-1 in the savior competition. Now can we talk about the criticism that she’s too sexy?

LS: From some angles, Ariel’s cinched waist and round derriere kind of reminded me of Kim K, which is a little disturbing to see in a mermaid. But most Disney princesses are flawed.

ED: Everyone heralded Frozen as a big feminist moment last year, even though Elsa’s eyes are bigger than her waist. So we haven’t made much progress on realistic body image in cartoons in the last 25 years. It’s obviously a problem, but let’s not single out Ariel just because she has the shell bra and great hair.

LS: The hair truly is fantastic. Dinglehoppers work, guys. Also, props to Disney for going with a redhead, although it would have been nice for Triton’s kingdom to have greater diversity than hair color and fish species…

ED: Yes let’s just say it: “Under the Sea” is kind of a racist song, though Disney has definitely done much, much, much worse. Let’s discuss the end. Specifically Ursula. Is she the best Disney villain ever?

LS: Evil? Yes. Savvy contract negotiator? ABSOLUTELY. To be fair, Ursula gives Ariel a head’s up that there’s a big chance she’s going to end up a sea worm or whatever those terrifying creatures are. And her legalese is so good that even Triton can’t find a loophole. No one is above the law.

ED: Another good life lesson. But yeah, Ursula doesn’t even pretend to be good like Cinderella’s stepmother or Cruella de Vil or Scar. Right off the bat, she owns her evil witchiness, and I love it! Can the next Maleficent be Ursula?

LS: Too bad she ends up harpooned. I mean, good for young love and all, but poor Ursula. Now that we’ve come to the end of the movie, I think we should talk about another big Little Mermaid complaint people have: the fact that she gives up her whole world to live with Prince Eric.

ED: Again, this is a thing that happens in literally every Disney princess film except Frozen—and even there Anna ends up with someone, so it’s baby steps. I don’t know why everyone’s hating on The Little Mermaid.

LS: But really, didn’t Ariel fall in love with the human world before she even knew who Eric was? She has always dreamed of being a “part of your world,” which I’m worried she’ll find disappointing considering my dad definitely still reprimanded me (even though I had legs).

ED: Her father doesn’t understand her, and she wants to explore her own interests. Any teenager can relate to that.

LS: Also, there’s a time when we all must move on from our immediate surroundings. Triton basically lives in her back yard. Most newlyweds would probably find that a little too close for comfort.

ED: And conveniently Eric doesn’t seem to have parents. And who are we to say that if he could turn into a merperson, Eric wouldn’t? Maybe in a more progressive version of the film they have a discussion about who moves where for whose career. But in the version we get, she can turn human. He can’t turn merman. End of conversation.

LS: I smell a sequel…

ED: They made one. I think it was bad. 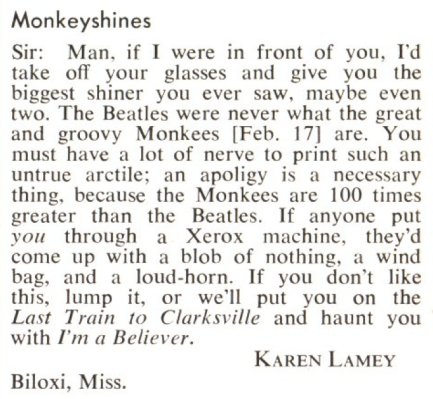 Read a Letter From the 1960s Version of a One Direction Fan
Next Up: Editor's Pick