The Postmaster General Hangs Up His Mail Bag, With a Parting Shot at Congress

When Patrick Donahoe began his job as an afternoon shift postal clerk at a Pittsburgh post office in 1975, the mail was still sorted by hand. Packages weren’t much of a priority. And email, let alone online shopping, were decades away.

“It was a dusty, dreary old place,” Donahoe says. Yet he stuck it out for nearly 40 years, rising to become postmaster general of the institution he joined as a 20-year-old student at the University of Pittsburgh making $4.76 an hour in pocket money. On Friday, Donahoe announced the end of that run. He’ll retire on Feb. 1, 2015 after four transformative and tumultuous years running the USPS.

Donahoe faced stiff headwinds when he became postmaster general in 2010. Mail volume was plummeting as people increasingly turned to e-mail and smartphones to keep in touch. And a multi-billion-dollar Congressionally mandated pre-retiree health benefit approved in 2006 had recently taken effect, draining the postal service’s budget. Just a few years before, first-class mail was near 100 billion pieces, close to its peak in 2000 (last year, the post office sent 65 billion pieces). The decline in mail and the pre-retiree mandate led to yearly deficits that in 2012 ballooned to almost $16 billion.

“When you’ve lost 30% of your volume, you’ve got to get your head out of the sand,” Donahoe says. “That’s probably been the hardest part, where you see people that just deny that obvious.”

Donahoe says as postmaster general, he often thought of the steel industry’s collapse around Pittsburgh in the 1970s, and he found the parallels to today’s postal service glaring. People back then, he says, “didn’t realize you had to move quickly and change to stay ahead of problems.”

So he moved fast. Donahoe pushed to close smaller, less trafficked post offices and mail distribution centers. He enticed older postal employees to retire by offering buyouts to tens of thousands of them (postal employment has dropped from 620,000 to 490,000 on this watch). He established “village post offices” in convenience stores and expanded the postal service’s reliance on “junk mail”—one category where volume has grown. Maybe more importantly, Donahoe increased the post office’s reliance on e-commerce and developed a growing partnership with Amazon to deliver packages on Sundays and has even test-marketed mailing groceries.

Donahoe’s modernization efforts have had plenty of critics, many of whom have accused him of attempting to dismantle an American institution while eroding its services. Many small towns have bristled at the thought of their local post office closing. Postal unions have protested against closures of distribution plants. And what looked like cost savings to Donahoe struck many as reducing customer service to the lowest possible level at a place where it was already in short supply. Just ask anyone who’s stood in line at their own post office.

Donahoe’s reforms have helped shrink the postal service’s deficit — in 2013, USPS lost $5 billion. But the post office has still defaulted on its Congressionally mandated pre-retiree payment and has lost money every year since 2007.

Donahoe found few friends in Congress, which can restrict the kinds of goods the post office delivers and mandate benefits for its employees. When Donahoe pushed to eliminate Saturday mail delivery, which he estimated would save $3.1 billion a year, Congress balked. They’ve been similarly resistant to reducing the Congressionally mandated pre-retiree health payments. A bipartisan bill sponsored by Senators Tom Coburn of Oklahoma, a Republican, and Tom Carper of Delaware, a Democrat, that would rein in the pre-retiree health benefit payments and give the postal service additional ways to expand its services while cutting costs has stalled.

“I think Congress has been irresponsible,” Donahoe says, adding that he believes the Carper-Coburn bill is a reasonable way of fixing the postal service’s problems.

Whether that happens will soon be Megan Brennan’s problem. The post office’s current chief operating officer is set to take over for Donahoe in February and would be the first female postmaster general.

Donahoe says he believes it’s time for him to step aside, even if many of the initiatives that started on his watch are still in their early phases. But he’s just not sure he’s got the energy to keep going.

“At a certain point in time, it’s time to go,” he says. “Some of these things may take three of four more years. I don’t know if I’ve got enough in the gas tank for three or four more years.” 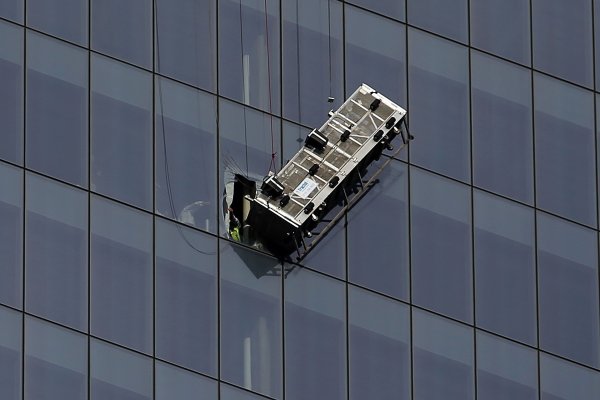