The True Story Behind Foxcatcher

Foxcatcher, out Friday, chronicles the real-life story of Mark and Dave Schultz (played by Channing Tatum and Mark Ruffalo, respectively), brothers and Olympic gold medalists in wrestling, who accept the patronage of John du Pont (Steve Carell), heir to his family’s chemical company fortune. The eccentric and erratic Du Pont is obsessed with the sport of wrestling but was never good enough to compete himself. When he attempts to live vicariously through the Schultz brothers, the situation turns foul.

The relationship between the three men was closely examined after an incident at Du Pont’s estate, called Foxcatcher Farms, caught the press’ attention in 1996. TIME’s 1996 coverage of those events and Mark Schultz’s upcoming memoir—also named Foxcatcher, and out Nov. 18—both elucidate how much of the Hollywood version is true and which details have been added for dramatic effect. (Schultz’s memoir, of course, is based on his own personal memory of and take on the events. The director conducted interviews with others who lived on Foxcatcher at the time.) Here’s what’s fact and what’s fiction.

Mark Schultz would hit himself in the face after losing

Schultz writes in his book that he wanted to make losing “the worst experience ever.” He would hit himself after a loss so that he would associate the bad wrestling match with pain and thus motivate himself not to make the same mistakes again.

In a testament to how committed Channing Tatum was to the part, Tatum actually hit his head through a mirror in a scene as Schultz—and injured himself doing it. Director Bennet Miller told Vanity Fair, “He punched that thing with his head three times and shattered it, and put his head through it and through the frame behind the mirror and through the drywall that the mirror was hanging on and left a divot two inches deep. When we took that mirror down, there was a hole in the wall. He actually cut himself, and you see his blood in that scene.” Guess Tatum really wants that Oscar.

Du Pont had long been preoccupied with participating in the Olympics in some capacity. He wanted to compete in the pentathlon in the 1968 games in Mexico. (Someone had once told Du Pont that since he already knew how to shoot, this was his best chance at making an Olympic team.) Du Pont built a shooting range and Olympic sized swimming pool on his estate to train. He even commissioned a mosaic of himself competing in all the events made of tiles shipped from Italy. Despite this heavy investment, he came in second to last in the trials for the Olympic team that year.

After giving up on his own athletic ambitions, Du Pont thought he could coach a team to a gold medal. Du Pont created Team Foxcatcher to train potential Olympians in swimming, pentathlon and triathlon. He brought wrestlers to Foxcatcher years later.

Mark Schultz did not immediately move to Foxcatcher to train. Du Pont first offered him a job helping to coach the wrestling team at Villanova University, which the magnate was reviving with his generous donations. (Du Pont’s first call was to Dave, but Dave turned down the job.) Mark Schultz moved to an apartment near campus and lived there while working and training at Villanova. Du Pont later fired Mark Schultz from Villanova but told Mark he could continue to train there if he moved onto the Foxcatcher estate. Seduced by the free rent and facilities, Mark did so. The Villanova wrestling program folded shortly thereafter, after just two years of competition.

Du Pont sustained the program at Foxcatcher by making millions of dollars of donations to U.S. Wrestling and attracting top talent with Schultz’s name. The mission was to churn out as many Olympians from the group as possible but, as shown in the movie, Du Pont’s preoccupation with glory over discipline made that task impossible.

In the movie, Mark Schultz’s career begins to spiral downward when Du Pont offers him cocaine in a helicopter. But Schultz admits in his book that he had done drugs, including cocaine, before he ever moved to Foxcatcher. In fact, Du Pont asked Schultz if he knew where he might get cocaine, and Schultz picked it up for him. Schultz says the two did the drug together only “two or three times” and even claims that Du Pont once showed him a kilo of coke labeled “evidence” that he was keeping in a drawer. Schultz assumed Du Pont had stolen it from a police precinct. (Police trained at DuPont’s shooting range, and he was considered a “friend of the force” thanks to his donations.)

That’s not to say that Schultz was the bad influence on Du Pont. Du Pont had a long-documented drug and alcohol problem. Even in their first meeting, Schultz says Du Pont was drunk and high. He rarely saw him sober in the years that followed. Friends, associates and neighbors confirmed as much to the press after Dave Schultz was shot. Even more bizarrely, they describe incidents like Du Pont driving two Lincoln Continentals into the farm’s pond, destroying property with his own personal tank and threatening people with guns. Du Pont’s former wife, Gale Wenk du Pont, filed a civil suit in 1985 claiming that he had threatened her with both a knife and a gun and tried to push her out of a moving car.

Du Pont and Mark Schultz had a close relationship

According to Schultz’s memoir the two were not as close as the movie might suggest. Schultz says that he got a bad feeling from Du Pont the moment they met and never warmed to him. The hostility between the two grew as Du Pont constantly interrupted Schultz’s training. Schultz writes that he once told Du Pont he was going to make t-shirts that said “Shut up and leave me alone” and wear them around the estate. Du Pont made the shirts and gave them to Schultz.

The movie also implies that Du Pont was harboring unrequited feelings for Schultz. Though Schultz says in his book that many suspected Du Pont might have been gay, he never saw any behavior to suggest so while living at Foxcatcher. However, a 1988 lawsuit (that was settled out of court) claimed Du Pont made improper sexual advances to Villanova assistant coach Andre Metzger.

Du Pont shot a gun during a wrestling practice

In the movie, Du Pont shoots off a gun during the middle of wrestling practice overseen by Mark Schultz at Foxcatcher. Schultz does not describe such an incident in his book. But he does relate a time when Du Pont burst into his apartment—Du Pont apparently entered the place without permission often—and threatened Schultz’s then-girlfriend by pointing the gun at her. Another Foxcatcher coach, Dan Chaid, left after eight years at the facility following an incident during which DuPont threatened him with a machine gun. According to Schultz, most people thought Du Pont was unbalanced but not dangerous. (During the apartment incident, Schultz stepped between his girlfriend and Du Pont without worrying that Du Pont would shoot him.)

Dave Schultz and Mark Schultz never lived at Foxcatcher at the same time. Though Dave was under Schultz’s employ, he lived in Wisconsin while Mark was living on the estate. Schultz asked Dave to coach the Foxcatcher team after Mark had moved to a coaching position at BYU in Utah. Dave quit his job at Wisconsin and accepted. In the version Mark tells, the move had nothing to do with Mark’s disappointng performance in competition.

After “retiring” for a moment after a bad loss, Schultz says he indulged too much in room service and—when he decided to compete again—realized he was 12 pounds too heavy to wrestle in his weight class. Dave did help him “cut weight” quickly: “I puked up the first pound and a half. I put on four layers of sweats and rode a stationary bike like a madman for the rest of the ninety minutes.” But unlike in the movie, Du Pont didn’t see this happening and leave. (Du Pont’s mother had also already died at this point.)

Dave Schultz had “P.U. Kids” written on his hand when he died

It was Schultz’s turn to pick up his kids from school the day he was shot and killed by Du Pont. He had written a reminder on his hand.

Du Pont was arrested immediately after the shooting

In the movie, Du Pont tries to evade arrest but is quickly apprehended. In reality, Du Pont had a two-day standoff in the police. He holed up in his mansion (filled with many guns), as the police surrounded the building outside. After he was arrested, Du Pont did not articulate any clear reason for committing the crime.

Read TIME’s original report on the events at Foxcatcher, here in the TIME Vault: Blood on the Mat

Read next: Sports at Cannes: Wrestling with Foxcatcher, Scoring With Red Army 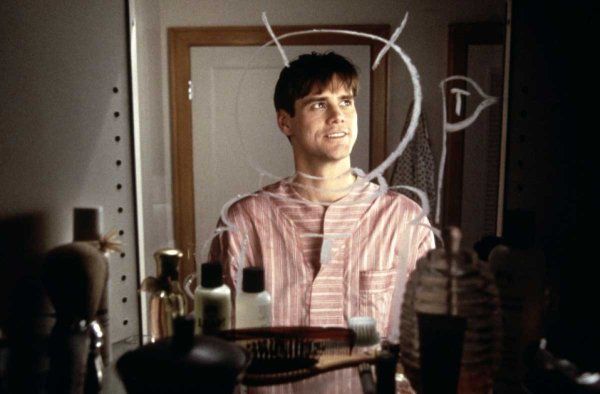 See the Many Faces of Jim Carrey
Next Up: Editor's Pick