Butt Out! In Defense of Hot Moms

I’m about to be a mom. And I love Kim Kardashian’s butt. Would that it were mine, well, it would be on the cover of Paper instead of sitting here writing in defense of hers. (Kim, I hope you’d do the same for me.) Would I pose glistening and naked? No. But do I think as a wife and mother Kim is beholden to some absurd notion of postnatal propriety, as some Glee cast members and other folks with wag-happy fingers seem to? No. In fact, I wish there were apron strings hanging down each cheek in that first photo—it’d be all the more winking an image. If you’re going to chastise a mother for indecency, why not get a head start and say women in general should never pose naked? Most of them will be moms one day. It’s as if, in the words of a foolish paragon of archaic decorum, “We can have a good time, but we cannot be wild.”

We Americans like our moms and wives a certain way, for the most part. We like them in minivans and on the sidelines—spread the Jif, not the legs. Just look at our advertisements (which have come a long way, even in my adulthood). There’s the Cadillac mom, so chic, so pulled together, so … fully dressed. There’s the series of LG Appliance ads—humorously written, but nevertheless relegating moms to the kitchen, the laundry room, the home front.

This is not to say we don’t want them to be attractive. No, we want that. We want postpartum bikini bodies and the jogging skirts that maintain them—marionettes on puppet strings, in G-strings, if you believe DirecTV. We fetishize famous moms throughout and after the gestational period—from bump watch to bounce back, and the faster the better. (Remember how hideously we treated Kim when she was pregnant?) We are okay with—enthusiastic about?—the classic Mom I’d Like to [This Bleeping Acronym Is Not Allowed Here], but even she must carry a few wholesome attributes: unconditional love, a sense of devotion, some bosomy, lipsticked comfort atop the five-inch heels.

How do we not like our moms and wives?

We don’t want moms to be naked-naked, nipples that recently breastfed a baby reverted to something perverted (we have enough problems with nutritionally exposed breasts as it is). Surely a mo-om (say it in your best multi-syllabic teenage voice) should not be getting a bikini wax. Or perching a crystal coupe on her behind while an arc of bubbly squirts suggestively over her head. It’s part of the overall “mommy problem” that the writer Heather Havrilesky nailed just days B.B.I. (Before Broken Internet)—”You might feel like the same person deep inside, but what the world apparently sees is a woman lugging around a giant umbilical cord.”

So in a few weeks, do I officially enter some sort of Sisterhood of the Sexless, whereby we stop celebrating the very thing that made us mothers in the first place? Grab the twinset and pop the chardonnay! For whatever else you can say about her, at least Kim is putting forth—very, very forth—the person she always has been, before baby and now beyond.

What about when North grows up? Will she be embarrassed? Well, there are many other problems in the family tree of more serious psychological concern than Mama’s wanton nudity. As far as Kim’s body parts go for the rest of us, we’ve seen it all before, on ourselves and on her. If she wants to strip down in a puddle of sequins, baby oil and champagne, great. I’ll take a judgment-free gander. Maybe some moms will feel sexually reinvigorated or newly liberated by Kim. For anyone who prefers not to see all of Kim, make like a breastfeeding scold and look the other way. 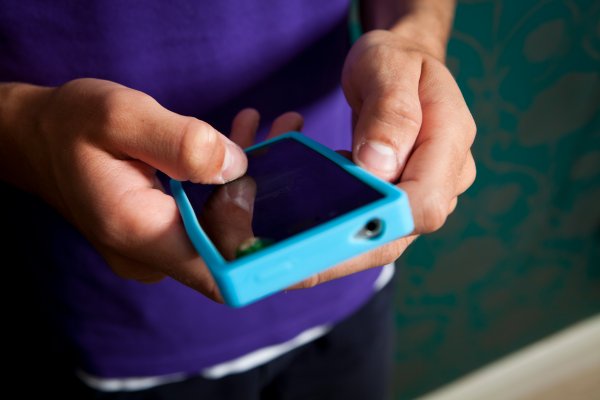 Hook-up Apps Are Destroying Gay Relationships
Next Up: Editor's Pick